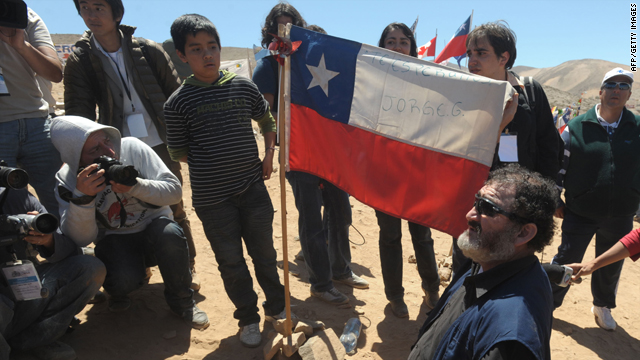 Chilean miner Jorge Galleguillos, right, is seen at the San Jose mine for a mass near Copiapo on Sunday.
STORY HIGHLIGHTS

Copiapo, Chile (CNN) -- About a dozen or so of the 33 miners freed in Chile this week after spending more than two months underground returned Sunday to the mouth of the mine to offer thanks during a private Mass.

For many of the miners, it was the first time back since their dramatic Wednesday rescue that was watched by the world.

Just the miners, their families and a handful of local officials were invited to attend the service.

One of the first miners to arrive was Juan Carlos Aguilar. Carlos Mamani, the only Bolivian of the bunch, also attended. Both wore the dark glasses rescue workers gave them to protect their eyes from the sun's glare.

Video: From football star to mine hero

Video: Behind the scenes: Chile

The ceremony took place in the inner sanctum of "Camp Hope," the settlement friends and family members of the miners built, as they waited for the return of their loved ones. Where worry had once reigned, the sound of cheerful claps floated across the rocky hillside during an emotional service.

Many of the miners who attended waved or gave a quick thumbs-up to the hundreds of reporters still gathered at the San Jose mine. But few spoke.

The 33 men have reportedly made a pact not to talk publicly about most of their underground ordeal -- at least not yet.

"There are some things that we cannot speak about because there is a pact between us," said freed miner Mario Gomez.

He spoke at a neighborhood party held in his honor Saturday night.

Still, he added: "From the first moment, I thought they would rescue us. I never lost hope ... I never lost faith." He said the experience refocused his priorities.

Read about how the miners waited for death

"I've been married for 32 years and rarely told my wife I loved her. I just wanted to tell her how much I loved her," he said, standing outside his humble cinder-block home.

For her part, his wife said she is happy and can't wait to get back to some semblance of a normal life.

"I'm happy my husband is home and that we can wipe out the nightmare of waiting for more than 60 days. We can wipe the slate clean and begin our lives again," she said.

CNN's Lonzo Cook and Karl Penhaul contributed to this report.