By the CNN News Wire Staff 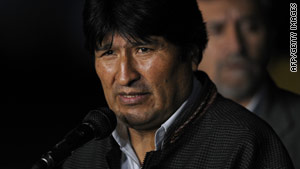 (CNN) -- It was the soccer foul seen round the world -- a knee to an opponent's groin. It didn't earn a red card and an ejection for Bolivian President Evo Morales, but it was caught on video -- and in this viral world of YouTube, it got him a lot of unwanted attention.

Morales apologized Thursday for his intemperate action, saying he had fallen into a trap. The player he kneed in the groin in a friendly soccer game Sunday had kicked him in the leg and then literally added insult to injury, Morales said at a news conference.

"The player who kicked me started to insult me and offend me and I very much regret my reaction," Morales said. "I ask forgiveness to the sportsmen, to the players, to the player. But after kicking me, it was another insult, a reaction.

"Again, I ask for forgiveness. Sport is integration, but later I realized it was a trap," Morales said.

La Paz Mayor Luis Revilla disputed that assertion Thursday, assuring that there was no trap, according to the Hoybolivia.com news site. Nor did the player in question insult Morales, the mayor is reported to have said.

"It was simply a soccer game that because of those incidents became a situation that drew much attention," the news site quotes Revilla as saying. "But I hope there are more soccer games between authorities and institutions to ratify that sports integrate, that it can be beneficial for all citizens."

The action unfolded Sunday in game between a team put together by Morales and a squad of city workers from La Paz, the capital of Bolivia.

Morales is seen on the silent video going up to the player, lifting his right leg and pointing at it. The Bolivian president then swiftly knees the opponent in the groin, turns around and walks away. The man, identified by the state-run ABI news agency as Gustavo Daniel Cartagena, falls on his back, clutching his groin with his left hand.

Morales said Thursday he had been kicked hard on purpose, differentiating the blow from what happens when two players collide going after a loose ball. He also said the foul against him was intentional because it happened within two minutes of the game starting.

He said he went to speak with the referee after he was kicked to ask why he would allow such rough play. Morales said he then went up to the player to remind him that it was only a soccer game but was met with insults and offenses that made him lose his composure.

The president said he has an agreement that when his team plays friendly games against squads from institutions or other agencies, the other side must consist of officials from those places. But ABI reported that local media said many members of the team that played against Morales on Sunday -- including Cartagena, the kneed player -- were not government workers and were brought in just for the game.

And, Morales indicated, at least one member of the opposing team was trying to goad him.

"After that happened, I thought about what a great error it was," Morales said. "Not so much for the kick he gave me, which he made me feel -- sure there was pain -- but for the insult. I complained because his spikes left a mark. I think it was the second time. But it remains clear that I fell into a trap."