Obama invited to visit Cuba -- and bring jailed Cubans with him 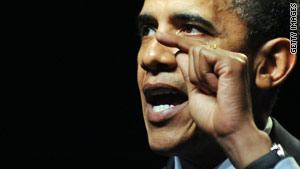 President Obama has been invited to visit Cuba.
STORY HIGHLIGHTS

Havana. Cuba (CNN) -- U.S. President Barack Obama has been issued an unexpected invitation to visit Cuba -- from the island's 90-year-old prima ballerina, who implored him to bring along five Cuban agents imprisoned in the United States for more than a decade.

"I want to invite the president of the United States to come to Cuba with his wife and lovely children," Alicia Alonso said at an event to call for the release of the agents, who were convicted of spying on Cuban exile groups in a hotly debated trial.

"I would ask a favor also. Please, to make everyone happy and to feel happy with all around the world, bring those five Cubans," Alonso said in English.

White House officials contacted Wednesday morning said they were not aware that any such invitation had been received.

The Cubans, known at home as "the five heroes," were sent to Miami to infiltrate violent exile groups at a time when anti-Castro groups were bombing Cuban hotels. They were arrested in 1998.

The invitation caps off a week-long international campaign with Hollywood stars such as Sean Penn and Danny Glover calling on Obama to step in and release the five.

Last year, the defendants lost their last chance of an appeal when the U.S. Supreme Court refused to hear their case.

The defense argued it was impossible for the men to get a fair trial in a city dominated by anti-Castro politics.

Three of the men were handed life sentences in 2001 for allegedly helping Cuba shoot down two unarmed airplanes that were dropping leaflets over the island, killing the Cuban-American pilots.

After Cuba began its biggest release of political prisoners in a decade, pro-Cuba activists stepped up pressure on Obama to respond by releasing the five Cubans.