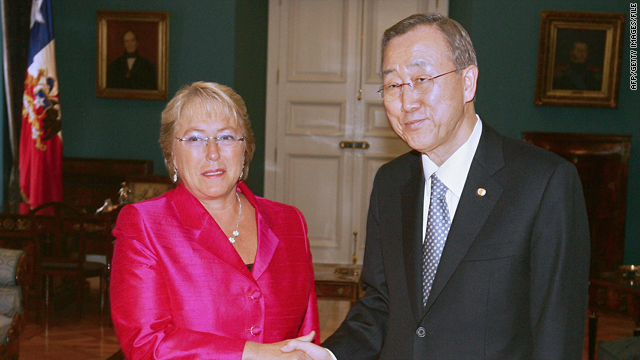 Bachelet, who was the first female president of Chile, will lead "U.N. Women," a body formed in July to oversee and merge four U.N. programs focused on promoting the interests of women and girls.

She was president of Chile from 2006 through March of this year, when she left with high approval ratings.

"Ms. Bachelet brings to this critical position a history of dynamic global leadership, highly honed political skills and uncommon ability to create consensus and focus among U.N. agencies and many partners in both the public and private sector," Ban told reporters Tuesday, according to an unofficial U.N. transcript.

"I'm confident that under her strong leadership, we can improve the lives of millions of women and girls throughout the world," he said.

The new agency is expected to become fully operational in January and have an annual budget of at least $500 million, double the current combined resources of the four agencies it comprises, according to the U.N. Women web site. The agency's official name is the "United Nations Entity for Gender Equality and the Empowerment of Women."

Bachelet was selected over two other finalists from an initial field of 26, Ban said.

"The appointment of Michelle Bachelet as the head of U.N. Women sends out a positive message about the U.N.'s commitment to gender equality. She brings with her experience at the highest political level coupled with a track record of work for women's rights," said a joint statement from three British officials: Foreign Secretary William Hague, International Development Secretary Andrew Mitchell and Minister for Women and Equalities Theresa May.

"As a longtime champion for the rights of women and girls and a proven political leader, President Bachelet is the ideal person to launch this important new agency that will help millions of people around the world improve their lives," Clinton said in a statement.