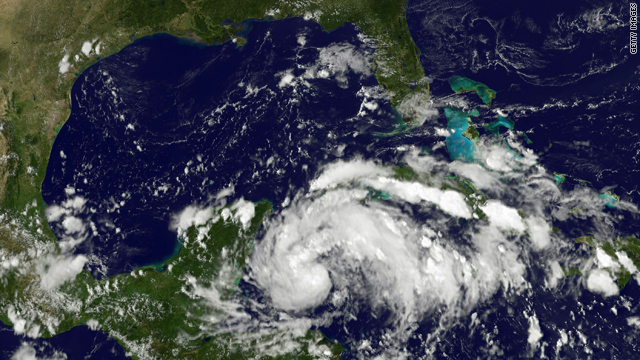 The warning was in effect for the east coast of the Yucatan Peninsula from Chetumal to Cabo Catoche. A tropical storm watch was called for northern Belize.

Karl, a small storm, will move over the Yucatan on Wednesday, the hurricane center said, and bring a storm surge and 3-5 inches of rainfall. It should weaken after landfall, forecasters say.

Julia joins Hurricane Igor, which weakened early Tuesday but showed signs of getting stronger later in the day. Igor still maintained its status as a powerful Category 4 storm as it churned far from land.

Igor, which started as a tropical storm on Saturday, rapidly intensified from a Category 2 to a Category 4 storm Sunday.

"Some fluctuations in intensity are possible during the next couple of days, but Igor is expected to remain a dangerous hurricane through Thursday," the center said, and it could have some effect on Bermuda.

Hurricane-force winds extended up to 45 miles (75 km) from Igor's center, and tropical storm-force winds could be felt up to 205 miles (335 km) outward, according to the center.

While the storm is expected to stay north of the Caribbean islands, the islands are expected to experience dangerous surf conditions, along with some wind and rain because of Igor's size, forecasters said.

As of 5 p.m. ET, Julia's center was about 405 miles (655 km) west-northwest of the southernmost Cape Verde Islands. The storm's maximum sustained winds increased from 75 mph early Tuesday to 85 mph (140 kph), and it was moving west-northwest at 9 mph (15 kph).

Tracking maps show Julia have showing little change in strength into Wednesday, but it is expected to see slow weakening by Thursday. It is not expected to threaten land.