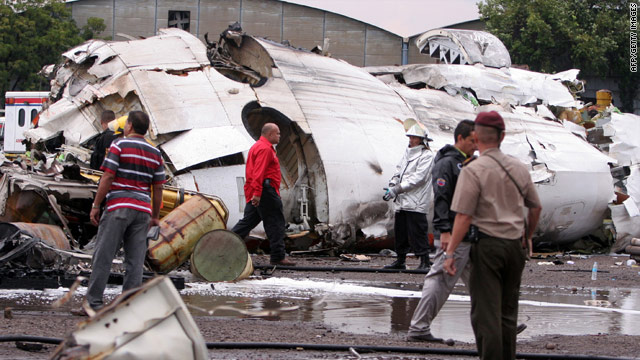 Fifteen people were confirmed dead and 36 survived when the plane, carrying 51 passengers and crew, crashed in the state of Bolivar, Gov. Francisco Rangel Gomez said.

Many of the survivors were taken to hospitals in the city of Guayana, he said. At least two of the victims died at the hospital, said Yanitza Rodriguez, director of the Hospital Uyapar.

Rangel Gomez declared three days of mourning but called it a "miracle" that so many people survived.

The survivors "are with some problems, but they are alive, thank God," he said.

Authorities had identified all but six of the deceased. A names of the victims would be withheld until they are all identified, Rangel Gomez said.

The aircraft belongs to the government-owned Conviasa airline.

Aerial photographs showed that the plane crashed in an industrial storage yard.

Best Western hotel clerk Ivan Maradey said he saw the plane tumble into some power lines before hitting the ground and exploding.

The aircraft was an ATR42, a twin-turboprop, short-haul airplane built in France and Italy, Rangel Gomez said. Conviasa Flight 2350 was en route from Isla Margarita to Guayana when it crashed, the governor said.

The cause of the crash had not been determined and remained under investigation, Rangel Gomez said. He identified the pilot as Ramiro Cardenas.

The officials made their comments on the CNN-affiliated Globovision TV station.