Cigarettes, electricity on the way to trapped miners 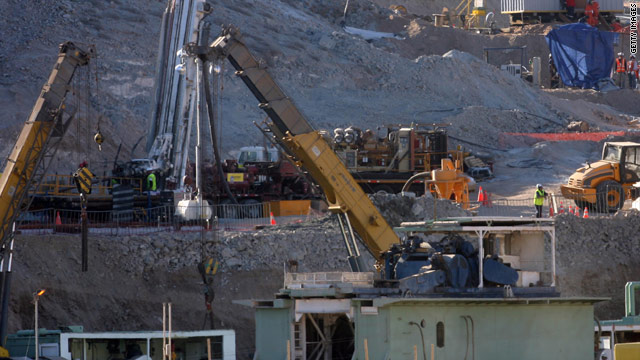 Crews are working on the assembly of the oil drill, which will work on the named "Plan C" to rescue the trapped miners in Chile.
STORY HIGHLIGHTS

Copiapo, Chile (CNN) -- The miners trapped for more than a month in Chile are getting a light in more ways than one.

The 33 men have received a power line that will allow them to install electric lights in their shelter 2,300 feet underground, mining officials said Saturday.

Officials are also granting the miners' longstanding request for cigarettes. Rescuers are sending down two packs a day to be split between the miners who want to smoke, Chilean Health Minister Jaime Manalich said.

Cigarettes were among the first requests made by some of the miners, but officials have been supplying them with nicotine patches and gum instead. Upgrades made to ventilation in the mine led officials to decide to allow them to smoke, Manalich said.

A new compressor was improving air circulation in the mine, Mining Minister Laurence Golborne said, and the addition of electricity will allow the men to have more lighting in the area where they are trapped, helping restore their sleep patterns.

Video: Drilling difficulties at mine site

After rescuers reach them, the lights might help the men adjust to daylight, Manalich said. But doctors will still take special precautions to protect the miners' eyes once they reach the surface, he said.

Officials estimate it could take until at least November to free the miners, who have been trapped underground since August 5.

Rescuers are using three drilling methods -- dubbed Plan A, Plan B and Plan C -- in their efforts to reach them.

The men underground have expressed concern over hearing the rescue drills' stopping and starting, Manalich said.

"We explained to them that the drills stop and start, there isn't any big change," Manalich said. "The drills stop for maintenance, they have programmed stoppages and they have stoppages like we are seeing with Plan B."

Plan B, a drill usually used to make water bore holes, has not been drilling after hitting a steel beam in the mine which "completely destroyed" the drill's bit, Manalich said. Workers, he said, were digging the broken bit out and then would replace it but that process could take several days.