Fidel Castro says his comment on Cuban model was misunderstood 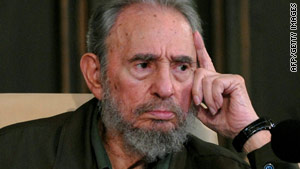 Fidel Castro says he was properly quoted, but the meaning of the quote was misunderstood.
STORY HIGHLIGHTS
RELATED TOPICS

Havana, Cuba (CNN) -- Former Cuban President Fidel Castro said Friday that he was misinterpreted when he recently told an American journalist that the Cuban model no longer works.

In a speech at the University of Havana that was then broadcast on Cuban TV, Castro said he meant "exactly the opposite" of what was understood by Jeffrey Goldberg, who was interviewing him for The Atlantic.

According to Goldberg, when he asked Castro during an interview last week if the Cuban model could be exported, the 84-year-old former leader answered: "The Cuban model doesn't even work for us anymore."

The comment was widely interpreted as Castro's admission that the Soviet-style economic model he introduced after his revolution no longer works.

Goldberg wrote on The Atlantic's blog that he turned to Julia Sweig of the Council on Foreign Affairs, who was present at the interview, "to interpret this stunning statement for me."

"She said, 'He wasn't rejecting the ideas of the revolution. I took it to be an acknowledgment that under "the Cuban model" the state has much too big a role in the economic life of the country,'" he wrote.

On Friday, Castro said he was correctly quoted, but that, "in reality, my answer meant exactly the opposite of what both American journalists interpreted regarding the Cuban model."

"My idea, as the whole world knows, is that the capitalist system no longer works for the United States or the world," he said. "How could such a system work for a socialist country like Cuba?" Castro called Goldberg "a great journalist."

"He does not invent phrases, he transfers them and interprets them," he said. "I await with interest his extensive article."

He told an audience that included some of his former soldiers who were there to mark the publication of his 608-page autobiography that the capitalist system "leads from crisis to crisis, each one more serious."