Families move to Chile's desert to be closer to trapped miners 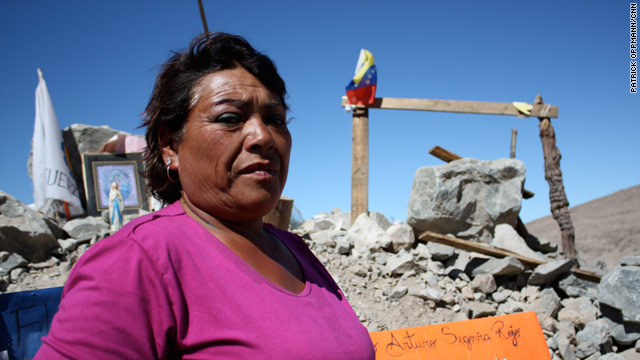 Maria Segovia shares a tent with her sister in the campsite above where her brother and 32 other miners are trapped.
STORY HIGHLIGHTS

Copiapo, Chile (CNN) -- Chile's Atacama Desert is no place to live. At night it's a freezing moonscape and when the sun comes up it becomes as hot as a burning skillet.

There is little life and almost no water.

The Atacama has been described as the driest desert in the world. Only when the "camanchacas," or thick blankets of fog, blow in from the coast is there any precipitation.

The brief watering can cause desert wildflowers to spring up and cover the rocky slopes in purple. But at the foot of a gold and copper mine a small and unlikely community -- part vigil, part refugee camp -- has also blossomed.

It is called " Campo Esperanza" or Camp Hope and it is where many of the families of 33 miners have vowed to stay until their loved ones are pulled from the earth.

It's almost certain to be a long wait.

Two drills have already begun hammering away at the collapsed mine to free the men and a third is expected to begin work soon.

Even so, Chilean mining officials say the men may not be freed until December.

Maria Segovia is dug in for the long haul. She shares a tent with her sister in a row of encampments that line the road leading to the mine.

On weekends more family members come. The rock wall behind her temporary home is a shrine to her younger brother Dario Segovia adorned with his picture, mining helmet and uniform.

How faith is playing an important role for the families

Sevogia's spartan quarters are luxurious compared to the living conditions the families first endured after the collapse.

"It was empty," Segovia said. "After the accident we began to build a camp. But at first it was terrible: We slept outside and in the day it was boiling, at night freezing and the worst was we didn't know if our boys were alive."

Seventeen days after the collapse, the families learned the miners had miraculously survived, but that freeing them would be an epic and lengthy undertaking.

Across the street from Segovia's tent, Miguel Valenzuela pours water on the ground to slow the flow of dust pouring into his tent.

A 25-year veteran of the mines, Valenzuela worked at the San Jose Mine, but wasn't inside when it caved in. Three close friends of his were entombed in the mine.

"It's a job but with a risk. Every day we walked in with the risk that something could happen," he said.

Valenzuela lights candles to pictures of saints to assist the rescue, he sweeps and cooks and cleans for miners families to stay occupied. He doesn't want to think about what his friends are going through.

"I know better than anybody how they are doing. I have been where they have been, I know what it's like in a mine."

The drilling at the mine is the constant backdrop and barometer for Camp Hope. Its residents gaze out at the drilling to see if work is being done and if they can divine how much longer they -- and the miners -- will be here.

At first it was terrible, we slept outside ... the worst was we didn't know if our boys were alive.
--Maria Segovia, sister of trapped miner
RELATED TOPICS

They make small talk, watch TV in a cafeteria tent set up by the local government, or walk to the hill overlooking the camp to tend flags bearing the names of their loved ones.

Every day Jose Sanchez watches a cell phone video of his son-in-law Victor Segovia, a self-taught musician, in which Victor plays a ranchera and sings to the camera with an easy smile.

"I watch it all the time to feel close to him," Jose said. "Soon we'll be with him, spending afternoons together, having him play guitar and harmonica. It's the gift God will give us."

In the meantime, the families continue to lean on each other and fill the time. If the miners are a symbol of resolve for the world, their families want to provide their own example.

After the mine collapse, many of the families did not know each other, said Segovia as she greeted new friends passing her tent. "Now I see them and we are one family. We worry, talk and fight for each other."

"What happened here was 33 families became one."