Oil drilling platform headed to Chilean mine to aid in rescue 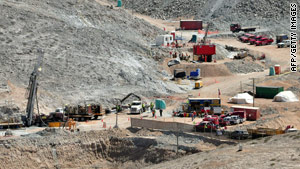 The Plan B drill being used to free the Chilean miners hit a snag when it struck a reinforcement beam.
STORY HIGHLIGHTS
RELATED TOPICS

(CNN) -- A large oil drilling platform is on its way to the Chilean mine where 33 trapped miners are awaiting rescue and is expected to arrive later Thursday or Friday, an engineer overseeing the drilling said.

According to Andre Sougarret, the 42-truck convoy carrying the drill was in the area of Antofagasta, Chile, approximately 500 kilometers (311 miles) north of the San Jose mine.

Other pieces of equipment will arrive from Puntarenas, Chile, and Bolivia, he said.

The oil platform will be part of Plan C, the third operation to drill to reach the miners. Chilean mining officials have said they believe that drill will dig faster than the other drills currently at work. But they cautioned that the miners, trapped since August 5, still may not be rescued until December.

Progress on the other two rescue operations was mixed, Sougarret said. The drill being used in Plan A -- a type usually used in mining operations -- reached a depth of 171 meters (187 yards) Thursday, 40 more meters (about 44 yards) since an update given by officials Wednesday. The Plan B drill, usually used to drill water bore holes, hit a snag at 268 meters (293 yards), Sougarret said, when it struck a reinforcement beam used in the mine's operations.

The men have been trapped for 35 days now, 2,300 feet under the earth. When rescuers first found them, the miners told officials they had survived for more than 17 days by sharing a jar of peaches and small amounts of tuna and mackerel that were in their shelter.

Officials were weighing how to best proceed after the problem with the Plan B drill but said the drill bit would have to be retrieved and replaced. "It was totally destroyed," Sougarret explained.

The Plan B device, which had been drilling for less time than Plan A's drill and had already surpassed its distance, also had a problem Wednesday with a cable malfunction.

At Camp Hope, the tent camp set up by miners' families holding vigil, residents eagerly scanned the rocky horizon for any sign of the caravan bearing the Plan C drill.

"I wish it were here already," said Milton Alvalos, whose nephew is one of those trapped.

As residents waited for the arrival of the newest weapon in the arsenal being used to rescue the miners, workers walked the route the convoy will take to make sure the heavy trucks will clear the winding road into camp.

"Just the logistics part is the tough part, getting the people and equipment to where you need it. We've got to figure out the route [and the] power lines," said Shaun Robstad, who was coordinating the equipment's arrival for Precision Drilling, a Canadian oil drilling company.

"We do this all the over the world," Robstad said, but always for oil, never before for trapped humans. "This is a first."