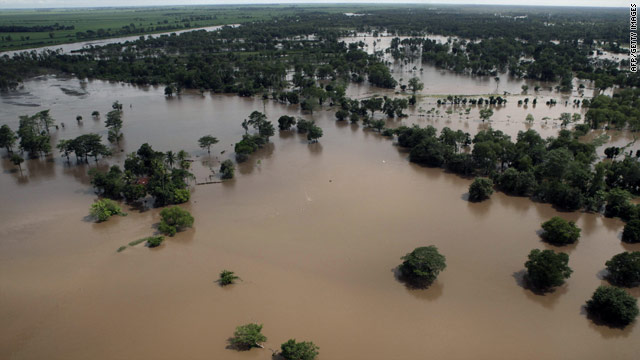 Around 11,500 residents have been evacuated and 9,000 have taken refuge in shelters, the nation's disaster agency said. More than 43,000 people are at risk from the punishing rain, said to be the strongest in 60 years.

Over the weekend, authorities closed parts of the Inter-American Highway after rains washed out sections of the road and caused at least two accidents.

The first, near kilometer marker 82, claimed 12 lives when a bus was buried, according to Colom's office.

A landslide at kilometer marker 171, knocked a number of vehicles and a bus off the road. When nearby residents rushed to the scene to help, a second mudslide crashed down on the exact same spot, said the emergency agency.

Thousands of homes, in addition to infrastructure and fields of crops, also were damaged by the heavy rains.

The torrential downpours come several months after more than 150 people died when Tropical Storm Agatha hit Guatemala in May.

Destruction from that storm was widespread throughout the nation, with mudslides destroying homes and buildings and burying some victims. At least nine rivers had dramatically higher levels and 13 bridges collapsed, Guatemala's emergency services agency said.

The May downpours created a sinkhole the size of a street intersection in northern Guatemala City. Residents told CNN that a three-story building and a house fell into the hole.