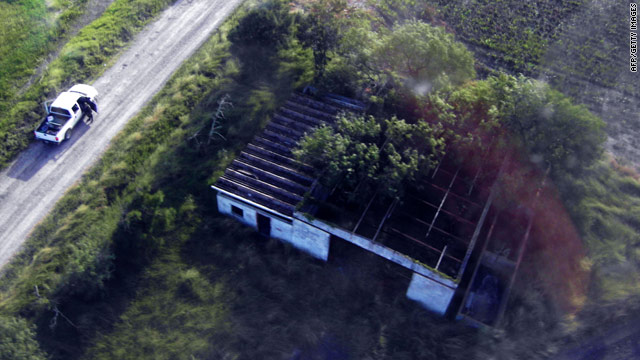 This is the alleged site of massacre of 72 migrants in the northeastern Mexican state of Tamaulipas in August.
STORY HIGHLIGHTS

(CNN) -- A survivor of a massacre in Mexico that left 72 dead is advising other would-be migrants to stay at home to avoid a fate like the one his companions met.

The victims in the killings, which happened in northern Mexico, were migrants from Central and South America who were on their journey north.

In an interview with Ecuadorean state television, the survivor, identified as Luis Freddy Lala, spoke about the harrowing ordeal. Although his name has been released, his face was blurred on camera.

Lala said his journey began in Ecuador, and from there he traveled to Honduras and then to Guatemala. During that leg of the trip, "everything was fine," he said.

From Guatemala he crossed into Mexico and made it with a large group of migrants to the northeastern Mexican state of Tamaulipas.

Three cars surrounded the vehicle he was riding in, and a group of heavily armed men stepped out, forcing him into another car.

The migrants were taken to a house, where they were tied up in groups of four, Lala said.

Then, at one point, the hostages were all thrown on the ground, face-down.

"I heard them shooting at my friends," he said. "They shot me and they killed everyone else."

From the broadcast portions of the interview, it was not clear what the motive for the massacre might have been.

As soon as the gunmen finished, they left the premises, Lala said.

"When they left I waited two minutes, got up and left the house," he said. He walked all night and into the morning until he found a military checkpoint where he asked for help. Along the way, Lala said, he was denied help from two men he encountered.

His advice to others wanting to go on the journey toward the United States is to not go because it is too dangerous to cross through Mexico.

"I'm telling all Ecuadoreans not to travel anymore, because the Zetas are killing lots of people," he said, referring to the cartel believed to be behind the killings.

Mexican officials confirmed Wednesday that a second person survived the attack but authorities said they would not reveal the second survivor's identity for safety reasons.