U.S. diplomats told to send their children out of Monterrey 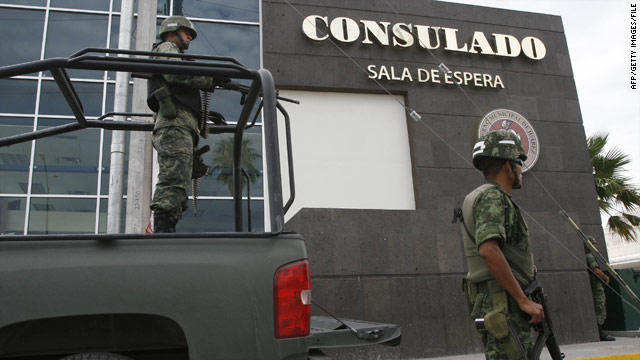 An authorized departure of family members of U.S. government personnel remains in place in Ciudad Juarez and other cities.
STORY HIGHLIGHTS
RELATED TOPICS

The order is the first of its kind in any Mexican city, said Brian Quigley, a spokesman for the U.S. Consulate General in Monterrey, adding it reflects an increasingly violent and insecure reality. Monterrey is located in northern Mexico.

The travel warning was issued after an August 20 shooting in front of the American Foundation School in Monterrey, said the State Department. The high incidence of area kidnappings was also cited as a motive behind the move.

In a separate message, also issued on Friday, the U.S. consulate in Monterrey said adequate safeguards simply do not exist to protect the children of U.S. employees.

"Local police and private patrols do not have the capacity to deter criminal elements from areas around the schools attended by the children of U.S. personnel assigned to the consulate," read the statement from Monterrey.

The authorized departure of family members of U.S. government personnel from consulates in the Mexican cities of Tijuana, Nogales, Ciudad Juarez, Nuevo Laredo, Monterrey and Matamoros remains in place, the State Department said.

The United States has a travel warning issued for Mexico because of drug-related violence, particularly in the northern border areas.