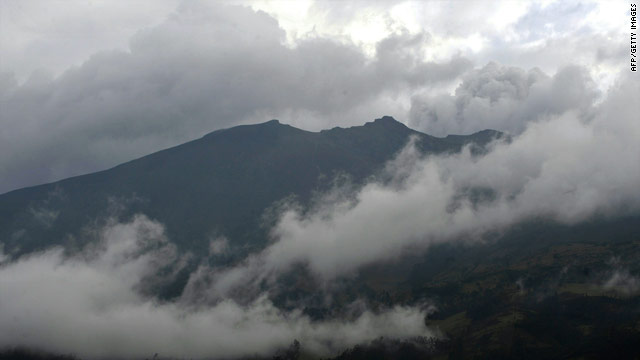 Colombian officials have urged about 7,000 people to evacuate the area around the Galeras volcano.
STORY HIGHLIGHTS

(CNN) -- Colombian authorities have issued a red alert, the highest level, for the Galeras volcano, because a non-explosive eruption occurred early Wednesday.

Images show a slight plume of smoke and ash emanating from the volcano, which is in southwestern Colombia, near the border with Ecuador.

Officials have called on about 7,000 nearby residents to evacuate to one of nine shelters in the area, but only 205 people had gone to four of the structures by Wednesday morning, the Ministry of Interior and Justice said in a news release.

The volcano is not in a heavily populated region, and there were no reports of injuries or structural damage.

Galeras, an ancient volcano that previously erupted in January, became active again in 1989.The only fatalities were in 1993, when nine people -- all scientists or tourists in or near the volcano's crater -- were killed.