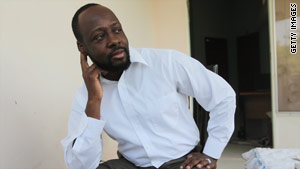 Wyclef Jean speaks with a journalist in Port-au-Prince, Haiti, on Thursday.
STORY HIGHLIGHTS

(CNN) -- Hip-hop singer and Haiti presidential hopeful Wyclef Jean pushed back on news reports Thursday that he is not on the list of candidates approved to run in this year's presidential election.

"I wanted to clarify a rumor on Reuters that there's a list of candidates that came out and that (my) name isn't on it," Jean told CNN's Larry King on Thursday. "That's not true. The list is supposed to come out tomorrow ... It's looking good for us."

Haiti's election commission has said it will decide Friday whether Jean is eligible to run for president.

Earlier Thursday, Reuters reported that Jean is not on the list of candidates who are legally cleared to run in the Nov. 28 election, anonymously citing a member of the nation's provisional electoral council.

While challenging the report, Jean also entertained the possibility that he will be declared ineligible to run, telling King he would continue organizing Haiti's youth to push for education reform. "Haiti's constitution says that all kids should have the privilege of a free education, and that's something we'll push for whether we make it or not," he said.

Jean met Thursday with Haitian President Rene Preval to discuss threats that Jean has received since declaring his candidacy earlier this month. The two a "great conversation," Jean said.

Jean said he declined an offer from Preval for increased security, saying he now feels "comfortable" about his safety.

Jean's eligibility is under question after claims that he has not lived in Haiti for five consecutive years before the election, a requirement in the nation's constitution. Jean's lawyer said his client meets that criteria.

In a statement earlier Thursday, Jean sounded more determined about his candidacy. "My job as the commander-in-chief will be to make Haiti once again the 'pearl of the Antille,'" he said.

"For far too long -- since the Duvalier regime -- Haiti has held its hands out for charity and pity, but the corrupt government abused the international financial committees that came to the country's aid," Jean said, referring to the regime that ruled Haiti from the '50s to the '80s.

"This will be no longer acceptable under my leadership," he said.

Jean said Thursday that he plans to ask all Haitians living abroad to invest $10 to help rebuild Haiti's infrastructure, from roads to schools to movie theaters. Each donor would get a share in a project, he said.

"I'm saying we will return Haiti to what it once was, but bring it into the modern world," Jean said in his Thursday statement.

Haiti's election commission was originally scheduled to rule on Jean's eligibility on Tuesday but postponed the decision.

Berto Dorce, Jean's lawyer, said this week that his client is eligible to run. "His candidacy has been contested and we went to court and proved that he is legally entitled to run for president," Dorce said. "Jean's position is pretty strong. He should be on the list."

Dorce said Wyclef has been paying taxes in Haiti, which makes him eligible.

Jean announced August 5 on CNN's "Larry King Live" amid fanfare that he had filled out the paperwork to run for president.

Since then, Jean's announcement has met with some criticism. Haitian-American rapper Pras, who once performed alongside Jean and Lauryn Hill in the '90s group The Fugees, said he supported Jean's opponent.

Actor Sean Penn, who has lived in Port-au-Prince for months since the earthquake helping displaced Haitians, also questioned whether the Haitian-born musician could make moves to lead the devastated nation.

Jean has reported receiving multiple death threats. "We have been getting threats since last night telling me if I know what's good for me, I would get out [of] the country," Jean wrote in an email to CNN on Tuesday.

Jean's lawyer also talked about the alleged threats. "We cannot tell who are sending these threats, but the closer the announcement, the more threats Jean is getting," Dorce said.