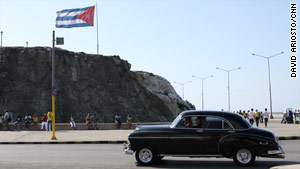 An aide said the goal of the new rules is to help Cubans build their own economy.
STORY HIGHLIGHTS
RELATED TOPICS

Washington (CNN) -- The Obama administration is preparing to announce new rules allowing some travel to Cuba, along with an expanded ability for Americans to send economic assistance, a senior U.S. official and congressional sources said Wednesday.

According to two congressional aides briefed informally on the plans, the administration is expected to announce "soon" that it will essentially reinstate measures that were in place under the Clinton administration.

Both aides stressed that the administration is still working through the details and legal language.

"It's a return to Clinton, plus some," one aide said, noting that President George W. Bush tightened restrictions on travel and cultural exchanges.

The central component of the policy involves "people to people" exchanges that would allow academics, corporations, humanitarian groups and athletic teams to travel to Cuba. The administration is not lifting tourist travel limits or the strict trade restrictions currently in place but would promote cultural exchanges and programs with universities or allow U.S. farms to send assistance to Cuban farmers as part of the new rules.

One of the aides who supports the changes stressed that the goal is to allow travel for people to help Cubans build their own economy and culture. The policy is "to go down there, give a message of hope, to help the Cuban people forge their own future as they want, not necessarily as the way another government wants."

In addition, the administration is planning to expand the policy it announced last year that allowed Cuban-Americans to send "remittances" or economic support to family members in Cuba. The new regulations would allow any U.S. citizen, as well as universities, churches and businesses, to send money or sponsor a partner in Cuba. There would be a cap on the amount of money that could be sent.

The new policy would make it easier for universities, sports teams and businesses to set up exchanges. The State Department would shift its current policy, which now denies visas for Cubans to travel to the U.S., to one that gives a "presumption of approval" unless a review discovers a problem with the request.

Although the administration cannot change current travel restrictions without congressional approval, it does have the authority to loosen visa rules

The congressional aides expected the administration to unveil the changes through a statement by the president or the secretary of state, along with text of the new regulations.

State Department spokesman Mark Toner said Tuesday that although he had nothing to announce, "our overarching goal here is to encourage a more open environment in Cuba and increased respect for human rights and fundamental freedoms. And, consistent with that objective, we've promoted measures to encourage the free flow of information and humanitarian items to the Cuban people."

Likewise, White House Deputy Press Secretary Bill Burton gave no details in response to reporters' questions Tuesday but added, "the president is going to continue to do things that are in the best interest of the United States and that help to create a more democratic environment and expand freedoms for the Cuban people."