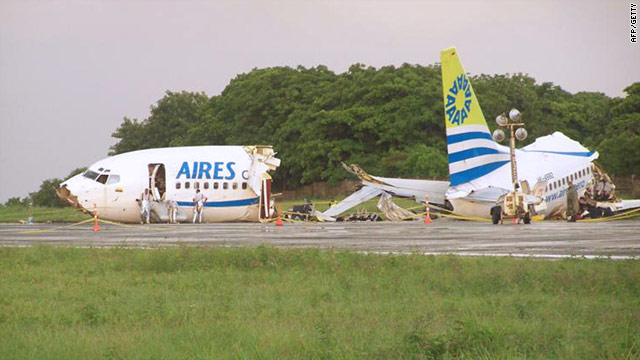 Bogota, Colombia (CNN) -- One passenger was killed after an airplane crashed in bad weather and broke apart while attempting to land early Monday on the island of San Andres, Colombia, officials said.

National police said 124 people were injured, many of them scattered on the darkened runway when emergency personnel arrived in the predawn hours. Six people, including an 18-month-old boy, were not injured, the national police said.

Some of the patients are in critical condition, said Robert Sanchez, director of Hospital Amor de Patria.

A list released by the Aires airline says 124 people were treated at two local hospitals. Four patients at Amor de Patria required surgery and another person at the hospital was in "reserved" condition, the airline said. Amor de Patria treated 101 victims while 23 were tended to at Clinica Villareal.

The most seriously injured were being transported aboard an air ambulance to Bogota, the nation's capital, Sanchez said.

Police identified the passenger killed as Amar Fernandez de Barreto. The passenger manifest, which goes by last name first, lists a Barreto Fernandez Paola Andrea. According to health officials, Barreto, who was in her 70s, died not directly in the crash but of a heart attack on the way to the clinic.

There was conflicting information about what caused the crash. The report from the national police said a downdraft may have shaken the airplane just as it prepared to land. But Pedro Gallardo, the governor of San Andres y Providencia state, told CNN en Español that lightning hit the plane. The pilot also reported a lightning strike, El Tiempo newspaper said.

CNN World Weather confirmed the presence of multiple lightning strikes around the San Andres airport at the time of the crash. Analysis of data from the World Wide Lightning Location Network indicates there were 11 strikes within 6 miles (10 kilometers) of the runway in a five-minute span around the time of the accident.

The weather event occurred as the plane was about 260 feet (80 meters) before the start of the runway, said Col. Hector Carrascal, director of navigation services at the Colombian Civil Aviation Authority. Wreckage was spread about another 328 feet (100 meters) on the runway, officials said.

Photographs of the airplane on the runway show it broke apart, with the nose and first eight rows of seat pointing in one direction and the rest of the aircraft almost pointing in the opposite direction. A release by the national police said the plane split into three parts.

Flight 8250 had taken off from Bogota shortly after midnight, police said.

CNN's Arthur Brice and Karl Penhaul contributed to this report.