Bolivian officials: Protesters' claims about neglect are off base 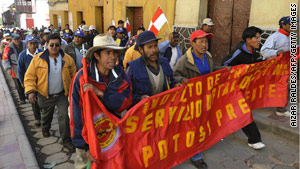 (CNN) -- The Bolivian government on Wednesday defended itself from accusations that it has not invested enough in a southwestern province that has found itself under siege by protesters for two weeks.

About 6,000 of the 160,000 residents of Potosi, the capital of the province of the same name, have mounted a blockade that has cut off all roads, train and air traffic with the rest of the country.

The protesters are demanding several projects, including construction of a modern airport, new roads and a cement factory. They are also in a boundary dispute with a neighboring province, Oruro.

Some protesters also launched a hunger strike, which has been joined by Felix Gonzalez, Potosi Province governor, and other officials as well as union leaders.

On Wednesday, the civic organizations in charge of the blockade said the only mediator they will accept is Bolivian President Evo Morales. The government did not immediately respond to that demand.

But the country's interior minister reiterated that the government will not use force to end the siege.

"In the government's strategy, the only solution to this problem is dialogue," Minister Sacha Llorenti said. "Under no circumstances are we going to fall into any type of provocation. We are not going to use force precisely because some radical sectors want this to have a disastrous ending."

Presidential spokesman Ivan Canelas made the strongest defense yet against the protesters claims.

The federal government has budgeted $577 million for new roads in Potosi province, a sum higher than for many other provinces, Canelas said, according to the state-run ABI news agency.

The government has also built schools, stadiums and parks in the province under a federal program, he said.

The country's minister of mines also made a plea, saying that the region's mining projects, and the royalties that it gains from them, are suffering from the blockade.

According to reports from the city of Potosi, the town suffers more each day from shortages of food and hundreds of people are stranded inside, ABI reported.

Canelas accused some opposition political leaders of trying to "provoke situations of confrontation without thinking in the interests of the people of Potosi."

He mentioned that the United Nations has weighed in on the matter, denouncing publicly the violation of the human rights of the people of Potosi who are trapped in the city.

"The human rights of free movement and access to education, health and the rights of children are violated with attitudes of violence emerging from the pressure tactics," Canelas said.

For their part, the protesters say that Morales has abandoned them after they supported his presidential bid four years ago.

The leftist Morales, who is indigenous, relied on a broad base of support among indigenous people and the poor -- nearly always one and the same in Bolivia -- for his election victory.