Colombia's leader to take office amid tensions with Venezuela 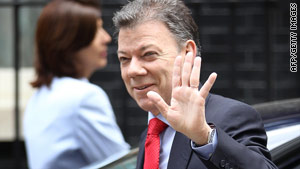 (CNN) -- Colombia's new president may have a chance to test his diplomatic skills as soon as he takes office Saturday. Venezuela's foreign minister could be attending his inauguration.

The announcement comes amid high tension between the neighboring countries, who are at odds over accusations that leftist rebels have found refuge in Venezuela.

Venezuela broke off diplomatic ties with Colombia last month after Colombian officials said they had photographic evidence of guerrilla camps in Venezuela.

But on Friday, Chavez said he hoped to offer more details about relations with Colombia in the coming days, according to state media.

"We are very optimistic. We must move forward," he said, according to the state-run Agencia Venezolana de Noticias.

Colombia made its case against Venezuela before the Organization of American States last month and asked for international observers to be allowed into Venezuela to verify the presence of the Revolutionary Armed Forces of Colombia guerrilla group.

Chavez has denied the allegations and accused Colombian officials and right-wing paramilitary units of plotting his assassination, while the Colombian government has accused Chavez of supporting the rebels.

Last week, he told state-run VTV that he hoped to meet with Santos as soon as possible.

Santos was elected president of Colombia in June with the highest vote total in his country's history: 9,300,000 -- roughly 70 percent of the vote. He ran as a conservative promising to improve Colombia's security.

Some of the strongest strikes against the Revolutionary Armed Forces of Colombia, or FARC, came under his leadership as minister of defense, including the high-profile hostage rescue of former presidential candidate Ingrid Betancourt in 2008.

"We have been tough on terrorism and we will be even tougher now," Santos said at a victory celebration after winning the presidential election in June.