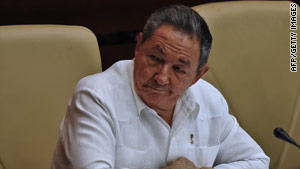 Cuban President Raul Castro said Sunday up to one million redundant state jobs would be eliminated.

Havana, Cuba (CNN) -- Cuban President Raul Castro said Sunday that his government would allow more private businesses and make it easier for those businesses to hire workers, as the socialist economy struggles to get back on its feet and shed up to one million redundant state jobs.

The government "agreed to broaden the exercise of self employment and its use as another alternative for the employment of those excess workers," Castro said during a biannual session of the National Assembly.

He went on to say that the government would eliminate "numerous" prohibitions to the granting of licenses for private businesses and to the sales of some products, as well as "make the contracting of a work force more flexible."

In exchange, those businesses will pay taxes on income and sales, and pay contributions for employees, he said.

The measures "constitute a structural and conceptual change in the interest of preserving and developing our social system to make it sustainable in the future," Castro said.

The decision was part of a series of measures approved by the Council of Ministers to reduce "the considerably inflated payroll in the state sector," he added.

Earlier this year, Castro said that more than one million state jobs, out of a total of 5.1 million, could be redundant.

The government has launched a few, small free-market reforms.

In April, for example, barbershops were handed over to employees, who pay rent and taxes but charge what they want. Licenses have also been granted to private taxis.

For a couple of years, fallow land in the countryside has been turned over to private farmers. The more they produce, the more they earn. Not surprisingly, output is up.

In his speech, Castro also mentioned for the first time the release of political prisoners that started last month.

"The Revolution can be generous because it is strong," he said.

The Catholic Church and Spain negotiated the release of 52 prisoners jailed in 2003 as part of a crackdown on people the government accused of receiving money from the enemy government in Washington.

So far, 21 prisoners have been released and flown abroad.

Castro did not give details about why Cuba agreed to free the "counterrevolutionaries" or if he expected any gesture in return.

Former President Fidel Castro did not make an appearance despite expectations that he might.