Scarred but alive after riding the train of death 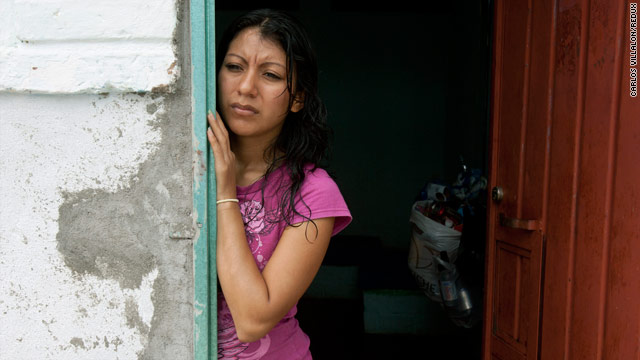 Arriaga, Mexico (CNN) -- The first thing you notice about Jessica Ochoa is her huge brown eyes.

She's a petite Salvadoran and was coming up to her 21st birthday when I met her in the southern Mexican border town of Tapachula.

The next thing you notice is her stiff walk. Her right leg was severed in February 2009, when she fell off a cargo train. The train's steel wheels did the rest.

By the time she reached the hospital, doctors say, she'd lost almost half her blood. What was left of her lower right leg and foot lay by the side of the tracks in a sock and tennis shoe.

Like thousands of other illegal migrants every year, Ochoa had been heading to "El Norte," which in Spanish translates as "The North" but means the United States.

Her American dream was to work hard and gradually save enough to buy a brick-and-concrete home for her mother to replace the tin shack where she lives with the rest of the family in a working-class neighborhood of San Salvador.

Only the poorest of the poor dare to ride aboard the lumbering cargo train that sets out from the station at Arriaga, in southern Mexico, every couple of days or so. They have little choice. This is a free though perilous ride, and they have no money.

Most of the migrants come from Central American countries like Guatemala, El Salvador, Honduras and Nicaragua. They cling to the train that some call the "Train of Death" and that others simply refer to as "La Bestia" (The Beast).

Hundreds, maybe thousands, of migrants have died falling from the Beast, some of them mutilated under its wheels. Many more have been robbed, raped or kidnapped.

Most carry no bag at all and have only a few dollars for the bare essentials en route.

When Ochoa set out in February 2009, she said, she was carrying a single change of clothing, $200 hidden in her shoe and a photo of her baby daughter, Kathi, whom she had left behind.

The day she left home, her mother, Dina, went to the hospital for surgery for uterine cancer.

It was about 1 a.m. when Ochoa and three friends boarded the Beast in Arriaga. She made it through the night and the next morning. But by midday, she was badly dehydrated.

She asked her friends for a drop of water, but no one was carrying much. And before she could drink, Ochoa recalls, she fainted and fell onto the train tracks, under the grinding steel wheels.

Nobody jumped down to help her; it was too dangerous, so she was left to her fate. According to staff at the hospital in the small town of Juchitan, a passer-by sent her to the hospital in a taxi.

Ochoa says she doesn't remember anything between the time she fainted and two days later, when she woke up in the hospital.

At first, we never intended to focus on a single character for this edition of "World's Untold Stories: La Bestia." We were aiming to concentrate on a small group of migrants as they headed to the United States.

But it became clear that Ochoa's story went far beyond the issue of illegal immigration, took us further than the mere pursuit of the American dream. What started out as a journey to overcome poverty became a journey to face her demons.

Ochoa is a young woman of contrasts. She is intelligent, and since recovering from her accident, she holds down a job at a shrimp restaurant in Tapachula.

Yet she was preparing to break the law to cross into the United States.

She's normally bright and bubbly, ready to chatter about almost anything. But when you talk too much about the accident, she's quiet and withdrawn.

Physically, Ochoa looks a little frail. It's frightening to imagine her small frame crushed by the Beast's grinding wheels.

But mentally, she is tough. She's asking nobody for sympathy, and most significant, she has not given up her dream of one day making it to America. To achieve that, she knows she will probably have to cross illegally.

Her ambition is on hold but not abandoned. She is too proud to return to live in El Salvador. She has a promise to keep to her mother and is still determined to buy her that house.

When we drove to the railhead at Arriaga, Ochoa asked to join us. She hadn't been back to look at the cargo train since her accident.

As we walked toward the tracks there, Ochoa was joking and laughing, never complaining about her somewhat ill-fitting artificial leg.

All that changed at the station platform. She bit her quivering bottom lip, fighting a feeling. Then a solitary, huge tear rolled down her face.

She never spoke much, but her big brown eyes seemed to say it all: the feeling that she had lost the best part of her life the day she lost her leg, the fear that maybe she would never accomplish her dream.

The fear that her mother, now in her 40s, would die of uterine cancer before she could buy her that new home.

For Ochoa and other illegal migrants prepared to make this journey, these are risks and sacrifices on a grand scale.

The American dream sounds grand, but for these people, it's the modest ambition to get a job washing dishes, picking lettuce or carrying bricks for $5 or $6 an hour.

The real dream is not to earn cash for their own benefit, but to save and send money home to parents, children, wives or brothers and sisters. To achieve that, they're ready to go through hell and back.

Jessica Ochoa's journey takes on a greater relevance amid the debate raging in the United States -- especially Arizona -- about illegal immigration.

It's a discussion that has split opinions between legal and illegal migration, between setting and upholding immigration laws at the expense of racially profiling the citizens of a multicultural society.

"World's Untold Stories: La Bestia" may not resolve the specifics of that debate. But it will certainly take you to the underlying core: a journey to explore the aspirations of some of Latin America's poorest.

It will introduce viewers to the "illegals" and the "wetbacks" by name: Jessica, Miguel, Greville, Antonio and Elvin.

Many are honest, hard-working people with the best intentions. But to achieve them, they're ready to break the law.

Above all, they, like Americans, have their own hopes and dreams.