Transit guru: My life in the bus lane 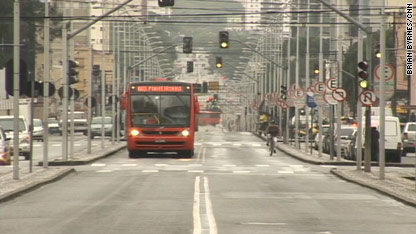 Curitiba, Brazil (CNN) -- I had been standing on the street with Jaime Lerner for less than one minute when a stranger stopped to greet him.

"Hello Mr. Mayor!" said a young woman carrying a backpack. A mere 30 seconds passed before another person did the same.

"Oh, my governor! How are you, sir?" said an older gentleman.

"Good morning," Lerner purred in Portuguese as we made our way towards the thing that made him a hero to his fellow Curitibans and an inspiration to a generation of urban planners around the planet: the bus.

Curitiba's Bus Rapid Transit system is one of the most admired public transportation systems on the planet, garnering accolades and spawning spin-off systems in cities like Bogotá and Los Angeles.

Curitiba's six dedicated fast-lane bus lines traverse the city, carrying 36,000 passengers per hour and 2.3 million overall every day. It's affordable too -- a single fare costs $1.25 and will take you 20 kilometers outside downtown.

"You [pay] before entering the bus and you [board] at the same level. And the frequency is less than one minute. It's like a subway. You don't have to wait more than one minute. So it's a good service," said Lerner, a stout polyglot who speaks seven languages.

We then climbed the steps to the elevated glass tube that functions as the enter/exit point and boarded the orange line towards the city center. As we cruised along, even more people stopped to shake Lerner's hand, and it quickly became apparent to me that his reputation as an "eco-pioneer" is well deserved.

What's more, it seems that the people who appreciate his work the most are his former constituents, who reap the rewards of his innovative thinking on a daily basis.

"I do think this city was a pioneer. It was a learning process and we quickly started to understand that you have to work fast," said Lerner.

Working fast is what got Lerner elected as Curitiba's mayor three times, and later twice-elected as governor of the Brazilian State of Parana. He and his young fellow architects conceived Curitiba's Master Plan in the mid 1960s, which soon resulted in the bus system as well as pedestrian-only streets, more parks, and later, a unique trash-for-cash recycling program that encouraged people to turn in garbage and reusable materials in exchange for food and other goods.

Word soon spread throughout Brazil and then the world about Curitiba's progressive and environmentally-friendly initiatives, earning it a reputation as one of the "greenest" cities on earth. Lerner now spends much of his time traveling the world and sharing his vision with others.

"Every city can improve its quality of life in less than three years. No matter the scale of the city, no matter the financial conditions," Lerner said. "When we realize that 75 percent of carbon emissions are related to the cities, it is the cities where we can be most effective."

But even Lerner, 72, has to deal with the daily reality of moving around a city with 3.2 million inhabitants. He owns a car but says he tries to use it only when necessary, and is constantly encouraging city planners to create work and living quarters located close to one another. To this end, Lerner certainly practices what he preaches: his office is located across the street from his high-rise apartment.

"My door-to-door trip takes about 40 seconds. It's a tough commute," he joked.

Every city can improve its quality of life in less than three years. No matter the scale of the city, no matter the financial conditions.
--Jaime Lerner, architect and former Mayor of Curitiba, Brazil.

Brazil's booming economy means more cars on the roads these days, and even in Curitiba there's gridlock, something that I witnessed firsthand during my first day in the city. But I soon learned that it only increases many Curitibans' love for the bus.

"On the bus I only spend 2 reales. For my car, I need 10 reales worth of gas. So it's better to suffer a little on the bus than to drive my car," said Octavio Silva, a hospital employee.

In addition to its lauded bus system, Curitiba also boasts plentiful parks -- there are 51 square meters of green space per person in the city -- one of the highest per capita rates on the planet.

One of those spaces is the Curitiba Botanical Garden, a sprawling park filled with flowers, ponds and trees. Its art-nouveau style greenhouse is one of the city's most recognizable landmarks.

That's where I met Fabio Duarte, a professor of Urban Planning at the Pontifical Catholic University of Parana who told me that Lerner's global reputation as an eco-pioneer is well deserved.

"He said this little city in the middle of Brazil has something to say; we can have good public transportation, we can have public parks, we can have some kind of recycling garbage program, and this is very important," said Duarte.

"Most of the programs that Jaime Lerner and his team started 30 years ago....have been left alone or neglected. Public programs can't be left alone. We must be there everyday to maintain them," he said.

Lerner left politics in 2002 and now dedicates his time to his architecture firm, which has worked on urban planning projects for cities including Shanghai in China, Perm in Russia, Mazatlan in Mexico and Luanda in Angola.

He is also designing an electric mini-car, the Dock Dock, that he hopes will clear congested roads and reduce carbon emissions. Lerner says he is proud of his accomplishments, but there's still much for him and others to do.

"There are three major issues now that are becoming important, not only for cities, but for all mankind: Mobility, sustainability -- which is linked to mobility -- and social diversity."

They are all issues that Lerner told me he hopes other city dwellers around the world will start to embrace. And with his infectious enthusiasm leading the way, I am confident that more and more will.