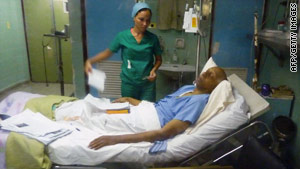 Cuban opposition activist Guillermo Farinas lies in a Cuban hospital on Wednesday at the end of his long fast.
STORY HIGHLIGHTS

Havana, Cuba (CNN) -- Cuba's Roman Catholic church has identified 12 more jailed dissidents who are expected to be freed in what would be the largest Cuban prisoner release in more than a decade.

The announcement Saturday raises the number of prisoners to be released in the next few days to 17, roughly one-third of the total amount the government plans to release by mid-November.

Cuba's church earlier announced the names of five other prisoners to be freed, and identified six others to be transferred to prisons closer to their homes.

The 52 political prisoners Cuba plans to release are the remainder of a larger group of 75 dissidents who were jailed during a government crackdown on political opposition in March 2003.

They represent roughly one-third of all known political prisoners left on the island, according to Cuba's unofficial Commission on Human Rights and National Reconciliation.

Farinas stopped eating solid foods in February following the death of jailed hunger striker and political dissident Orlando Zapata Tamayo, who was protesting what he described as poor conditions in detention. Zapata's death sparked international condemnation from Europe and Washington and drew a rare statement of regret from President Castro.