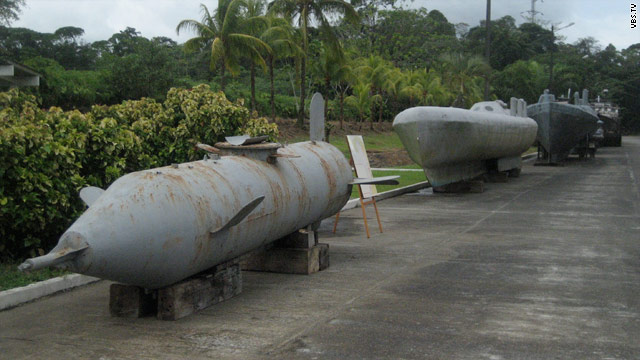 Brooklyn, New York (VBS.TV/MOTHERBOARD.TV) -- Military checkpoints line the long and winding road from the airport in Cali, Colombia, to the coastal city of Buenaventura.

These are expected sights in the long-running conflict we know as the "war on drugs."

Plan Colombia, legislation passed during the Clinton administration, provided billions in military aid to Colombia to help halt the cultivation and transport of cocaine. It has had only mixed success.

Buenaventura, a strategic port city and maritime gateway to Central and North America, is a haven for the newest clandestine agent in the illegal drug trade: the "narco-sub." As this decades-old conflict has ebbed and flowed, one thing has remained constant: the sheer ingenuity of narco-traffickers to invent and exploit new methods and routes for smuggling.

We were granted access to the Málaga naval base about an hour outside of Buenaventura, which has been at the forefront of interdicting these vessels. The Colombian navy said some cartels are allocating increasing resources to the development of new smuggling technology.

Several decades ago, Samsonite suitcases and underwear refashioned with hidden pockets enabled upstart smugglers to carry drugs across borders. Today, narco-subs are at the cutting edge of smuggling technology.

The Colombian navy has collected a small group of narco-subs and boats at Málaga. They resemble speedboats with their roofs removed, more than any images you might conjure from "The Hunt for Red October," and most of them aren't engineered to be fully submersible.

But despite being built off the grid, having a ramshackle appearance, and occasionally malfunctioning at sea, narco-subs are increasingly used by traffickers to carry millions of dollars of illicit cargo, while evading some of the world's most technologically advanced military equipment.

See the rest of Colombian narco-subs at Motherboard.tv

It is unknown how many narco-subs have been deployed. The ones caught so far by the Colombian navy each sports a slightly different shape and set of features -- at least from the outside. But in the dark and musty interior of two semisubmersibles, their shared purpose is clear: to carry illicit cargo, a small crew of men, and enough gasoline for a journey that could last several weeks. What the vessels do not include, said officials, is a bathroom.

Miguel Angel Montoya helped spearhead the construction of semisubmersibles for drug smuggling prior to leaving the trade.

"At the beginning, in the times of Pablo Escobar, it was common for planes to leave Colombia and land on clandestine strips in the U.S. or Mexico. Later, that was difficult. ... Innovations in drug trafficking come when the situation hits a crisis state," said Montoya.

One of his last designs was the "torpedo," an unmanned submersible towed behind another boat on the surface and outfitted with a radio-controlled recovery system in the event the navy captured it. Having temporarily discarded the evidence, the crew could later recover its cargo and continue its journey.

The "torpedo" represents the height of narco-sub innovation as it was known five years ago. Who knows what might be crawling under the ocean's surface today.

This piece was created in partnership with Dell for Motherboard.tv -- VBS.TV staff