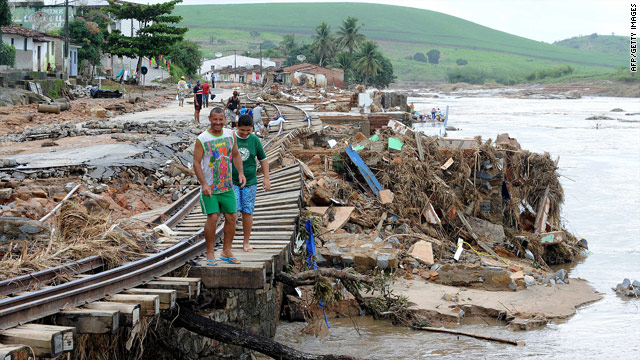 Rio Largo, Brazil (CNN) -- Federal aid is flowing to rain-ravaged areas of northeastern Brazil and the number of missing has diminished to less than 140, but more than 150,000 people remained homeless or displaced Friday, the government said.

The death count in two hard-hit states still stood at 46 -- 29 in Alagoas state and 16 in Pernambuco, Agencia Brasil said.

There were nearly 75,000 homeless or displaced residents in Alagoas and more than 80,000 in Pernambuco, the national civil defense office said.

In addition, civil defense said, there were more than 19,000 homes in Alagoas that were damaged or destroyed, as were 79 bridges.

In all, civil defense said on its website, 59 municipalities have been affected in Pernambuco and 28 in Alagoas.

The number of missing in Alagoas, which had stood at more than 600 Thursday, dropped to 135 as residents in some flooded towns were rescued, civil defense said.

The money comes on top of a previous 50 million reais ($27.7 million) destined for Pernambuco and Alagoas.

Lula also signed Thursday an interim measure of 1 billion reais ($555 million) to purchase construction material and equipment for businesses affected by the floods.

The Organization of American States and the United States, which offered $50,000, also have pledged aid.