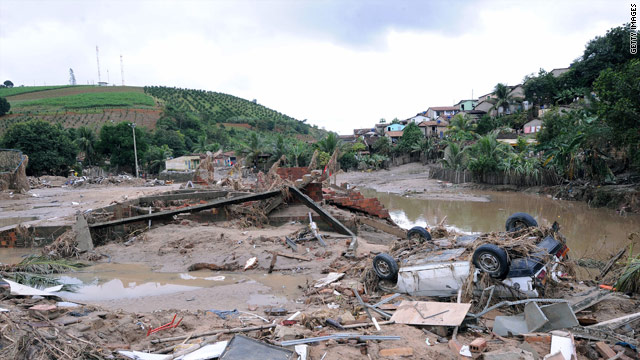 The money comes on top of a previous 50 million reais (U.S. $27.7 million) destined for the two hardest-hit states, Pernambuco and Alagoas.

Aid has also been pledged by the Organization of American States and the United States, which offered $50,000.

The death toll from the flooding grew to 46 Thursday, and more than 150,000 people have been left homeless or displaced, according to the government-run Agencia Brasil news service.

More than 80,000 residents have been left homeless or displaced in Pernambuco state and about 74,000 have met a similar fate in Alagoas state, the news agency said.

In Alagoas, more than 11,000 homes have been destroyed and another 7,000 damaged, Agencia Brasil said.

Nearly 11,500 houses and 79 bridges have been damaged or destroyed in neighboring Pernambuco, the news outlet said.

Twenty-nine people have lost their lives in Alagoas and more than 600 are missing, Agencia Brasil said. In Pernambuco, 17 people have died.

Fifty-four cities have been affected in Pernambuco and a state of public calamity has been declared in 30.

In the Alagoas city of Rio Largo, some survivors searched for the missing Wednesday. Among those who have not been found were Weltgom Melo's parents, who were dragged away by a heavy current while shopping for food.

"I only ask God for help in finding them," Melo told CNN. "It's difficult. All I can do is wait for the Civil Defense and firefighters to do their job and help me find the bodies."

Cicero Aciolo lives next to the Mundau River, which cuts through Rio Largo. He had to run for his life when the water started rising quickly.

"We ran next door and we saw how the water was beginning to rise and we had to climb over walls to save our lives," he said.

Another survivor said she barely had time to escape.

The rain that started late last week has stopped and the enormous task of reconstruction is beginning.