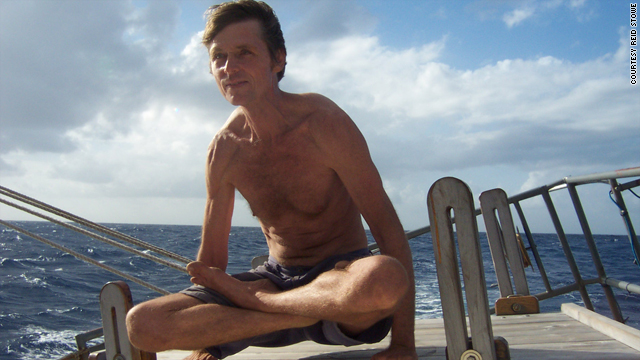 Reid Stowe, who has just returned from what he says is the longest non-stop sea voyage in history on the top deck of his boat.
STORY HIGHLIGHTS

London, England (CNN) -- Adventurer Reid Stowe is due to set foot on dry land Thursday for the first time in over three years.

It will mark the end of the longest non-stop voyage in history, says the U.S. sailor, who claims to have broken five world records.

Stowe, 55, has a 21-month-old son he has never met, by 23-year-old Soanya Ahmad who accompanied him on the voyage for 10 months. The pair set sail from New York in April 2007, 20 years after Stowe first began preparing for the journey, on a schooner he built himself.

With a hull stuffed full of food, large tarps to catch rainwater, solar panels for energy, a laptop and a satellite phone, Stowe began a voyage that has lasted 1,152 days -- without once returning to land or stocking up on new supplies.

In a satellite interview with CNN the sailor and artist talked about surviving at sea and said the only reason he's returning is to be with his family.

CNN: What made you decide to embark on a 1000-day non-stop voyage?

Reid Stowe: I conceived of this journey back in 1986. At that point I was preparing for a long expedition around Antarctica, and I thought to myself "what will I do with the boat after I've finished?"

CNN: How did you prepare?

RS: I've really been preparing all my life. When I was a teenager, I sailed alone in the South Pacific. Then I built my first boat when I was 20 -- a catamaran with no motor, radio signal or electronics. With a Dutch friend, we sailed it over four continents by ourselves.

Since then I've been on numerous expeditions all over the world. But experience isn't the only important thing -- I built [the boat] so I know every inch inside out, and this gives me a tremendous intuition when I'm sailing her.

CNN: What is your daily routine?

RS: I spend the first half of the day working on the boat. There's always something that needs repairing, cleaning or adjusting. One leak left unattended or too many torn sails and you could suddenly be in serious trouble.

I trained as an artist and sculptor, so after lunch I spend a lot of time painting. In the evening, I meditate and practice yoga for a few hours before dinner.

I drink a lot of water and tea before bed -- so that I wake up every so often in the night to check everything's OK. And then it's morning again. And this is my routine and I've kept it very closely and very exactly.

CNN: Do you manage to sustain a healthy diet?

RS: I have a fantastic diet. I have huge sacks of rice, beans and pasta. I've tons of nuts that I roast myself, and nearly every day I eat fish -- mostly delicious tuna or mahi-mahi.

I used to have a garden -- I grew everything from lettuce to tomatoes, to mustard greens -- until my boat was turned upside down off the Cape Horn and all the earth got dumped out.

The absolute key to my diet, the real secret to what has kept me going all these years, is sprouts. It gives you way more fresh food and grows much faster anyway.

CNN: How do you cope with loneliness?

RS: There really is no loneliness. For a start I speak to my fiance every week and, until my computer broke down, I was regularly communicating on the web.

But I also think of myself as a spiritual sailor. When you're out here for so many years by yourself, you have a lot of time to reflect on the nature of the sea and the vastness of the universe.

CNN: What has been your highlight?

RS: I'd always planned to draw a large piece of conceptual art into the ocean that could be viewed by plotting the signal from my GPS on a map.

But at the beginning of the voyage I had a huge collision which bust my forward sails and left me unable to sail against the wind.

Then, after I'd spent a few months drifting around the South Pacific refilling my water tanks, I got an email from a friend who told me to look at my GPS chart. I looked and staring me in the face was the exact shape of a whale. I'd drawn it completely by accident.

CNN: Plans for the future?

RS: The only reason that I'm going back is because of my loved ones on the shore. I just want to get back and be with them because they're the ones who made the whole voyage possible.