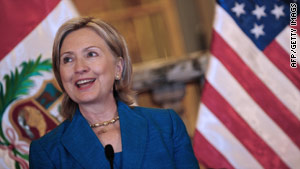 (CNN) -- Peruvian President Alan Garcia met for more than an hour Monday with U.S. Secretary of State Hillary Clinton, who is in Lima for the 40th General Assembly of the Organization of American States, Peru's state-run news agency said.

Garcia, who met with President Barack Obama in Washington this month, said Monday that Clinton's visit adds momentum to the cooperation and friendship between the two nations, according to the government's Andina news service.

Clinton also will travel this week to Ecuador, Colombia and Barbados before returning to Washington on Thursday, the State Department said.

Clinton is scheduled to meet Tuesday with Ecuadorian President Rafael Correa and with Colombian presidential candidates Juan Manuel Santos and Antanas Mockus and President Alvaro Uribe on Wednesday, the State Department said. On Thursday, she is slated to attend a meeting of Caribbean nations in Barbados.

One of the main topics at the OAS meeting will be whether to readmit Honduras, which was ousted from the regional organization last summer after a military-led coup toppled democratically elected President Jose Manuel Zelaya. Honduras returned to democracy in January when Porfirio Lobo was sworn in as president after being elected in November.

The United States has said it favors Honduras' readmission, but the measure may face opposition from Brazil, Venezuela and Nicaragua, all of which were strong Zelaya supporters.

Zelaya is in exile in the Dominican Republic and has said he will not return to Honduras. Lobo has said the former president would not be prosecuted for any alleged infractions while in office.

The OAS consists of 35 nations in the Western Hemisphere. Cuba was ejected from the organization in the early 1960s.