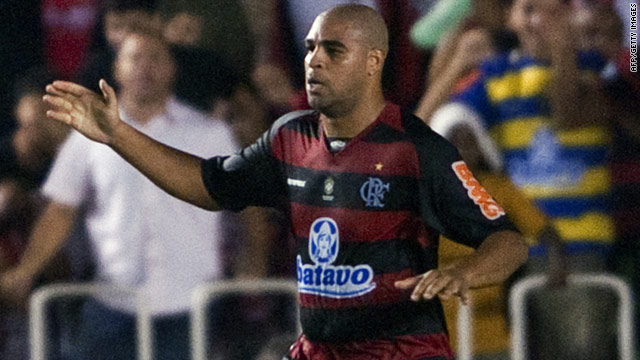 Flamengo striker Adriano missed out on a place in Brazil's squad for the World Cup in South Africa.
STORY HIGHLIGHTS

(CNN) -- Brazilian football star Adriano appeared before a prosecutor on Wednesday and denied accusations of associating with a top Rio de Janeiro drug gang, according to state officials and the player's lawyer.

During a preliminary hearing, Rio de Janeiro state prosecutor Alexandre Themistocles interrogated the stand-out striker, who goes by only one name as do many Brazilian footballers, over his alleged relationship with Fabiano Atanasio da Silva, one of Brazil's most wanted drug suspects.

According to law enforcement agencies in Rio de Janeiro, da Silvia is a drug kingpin who rules many of Rio's slum neighborhoods with an iron fist.

Investigations against Adriano were launched after Rio de Janeiro's O Dia newspaper published photos of the footballer posing with da Silva while making a hand gesture that is commonly known to represent a drug gang known as Commando Vermelho, or the Red Command.

The Red Command is the oldest and one of the most powerful gangs in Rio de Janeiro, dominant in the slum neighborhoods known as favelas, according to authorities.

Adriano grew up the Vila Cruzeiro favela, which is ruled by the Red Command, police said.

Adriano was also questioned over a bank transaction that involved R$60,000 (US$33,000) in December of 2009 and whether that money was handed over to da Silva, the office said.

Adriano has denied all accusations, according to reports from the courtroom. Adriano's attorney, Ary Bergher, told Brazil's TV Globo that Adriano denies ever handing money to drug dealers.

"He has never delivered any money to any drug-trafficker," said Bergher.

According to a United Nations report, Rio's drug gangs have become a growing challenge to public security, as Rio's airport serves as an important shipping point for the cocaine drug trade. Rio's drug gangs are using military expertise and weaponry to target civil police, the report said.

Last year, two policemen died in Rio after their helicopter was shot down during a shootout between drug gangs.

According to the official Web site of FIFA -- the sport's global federation -- Adriano was once considered one of the best players in the world, but his "so-called love of the nightlife," combined with injuries and personal problems, forced him to return to Brazil from Italy, where he played for many of that nation's top teams.

According to FIFA, Adriano is looking to repair his battered image in Italy with a move to Roma this summer.