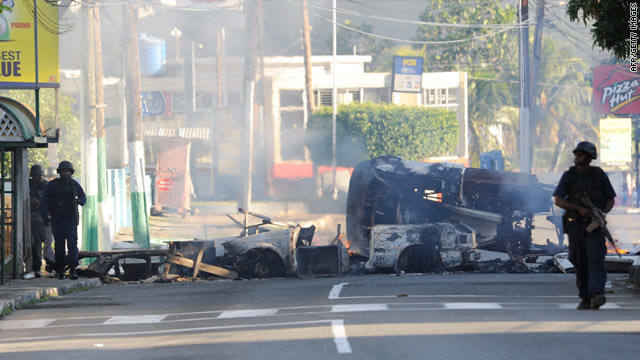 (CNN) -- At least 29 people, most of them cilivians, have been killed in Jamaica's capital amid an all-out police assault on a suspected drug lord's stronghold, the island's government reported.

Two police officers, one soldier with the Jamaican Defense Force and 26 civilians have died in a protracted push that began Monday, Information Minister Daryl Vaz said. Another 25 civilians have been wounded, along with six Jamaican troops.

Security forces have been fighting people who want to prevent the extradition to the United States of Christopher "Dudus" Coke, who was charged last year in U.S. federal court with conspiracy to distribute marijuana and cocaine and with conspiracy to traffic in firearms illegally.

Twenty-six of the dead were civilians, and one was a Jamaican Defense Force member; 25 civilians and six defense force members were injured as security forces battled criminal elements in Tivoli Gardens and Denham Town, officials said.

A woman in the area said that the front of her house had been "shot up" and that police had taken away her nephew and grandson for questioning. They did not say how long her relatives would be detained.

Violet Dias, an American citizen from New York, said she was locked down in her house because of the assault.

Dias, an amputee and an asthmatic, is due to return to the U.S. on June 14.

The government said those killed were mostly males and their bodies were recovered from areas close to barricades, building entrances and gullies coursing through Tivoli Gardens. It said 211 people, including six women, were detained.

Are you there? Send stories and images to iReport

The fighting has paralyzed the metropolis.

Jamaican Prime Minister Bruce Golding has declared a state of emergency in some parts of Kingston. Schools are closed in the capital, and at one point some flights were canceled, said U.S. State Department spokesman P.J. Crowley.

"Our embassy in Kingston is closed today, and we will continue to make that evaluation on a day-to-day basis based on events on the ground in Kingston," Crowley said.

"The United States government and the government of Jamaica continue to work collaboratively to ensure the safety and security of our citizens as we also counter illicit trafficking."

Golding has requested that public defender Earl Witter and political ombudsman Dr. Herro Blair visit Tivoli Gardens on Tuesday to assess the security operation and determine the number of casualties, the government said.

The Red Cross also will provide support, including ambulances and medical care to the injured, it said.

Coke maintains a heroic reputation in the Kingston slums, with some people comparing him to Robin Hood, Jesus and one-time Colombian kingpin Pablo Escobar. He has helped the community by handing out food, sending children to school and building medical centers.

But drug enforcement officials said he deserves to be classified as one of the world's most dangerous drug lords.

"He is the head of an organization, a cartel or a syndicate that has a global impact and also has a direct impact on the United States," said Michael Braun, a former chief of operations for the U.S. Drug Enforcement Administration.

On Monday, residents said that government helicopters dropped explosives into the area near Coke's stronghold, though it was not clear whether he was there.

The attack came after residents blocked roads in the area to restrict access to police and military. The violence then spread to Spanish Town, about 20 minutes outside the capital, where armed thugs blocked a major road and a bridge that serves as a link between Montego Bay and Kingston, police said.

Coke's lawyers were to meet with the charge d'affaires officer at the U.S. Embassy in Kingston. Coke's attorney, Don Foote, said he would listen to U.S. authorities but insisted his client should face charges in Jamaican courts.

Golding said last week that citizens should "allow the courts to deal with the extradition matter," the state-run Jamaica Information Service reported.

In a statement Sunday, Golding announced an emergency meeting of his Cabinet in response to the heavy gunfire and blockades, the information agency said.

Larry Birns, director of the Council on Hemispheric Affairs think tank, said he believes that Jamaica "is probably tipping into being a narco-state, and it has become too big a problem for the United States to handle in the tried and true ways of the past."

In August, the U.S. attorney's office in New York charged Coke, accusing him of leading an international criminal syndicate known as the Shower Posse.

"At Coke's direction and under his protection, members of his criminal organization sell marijuana and crack cocaine in the New York area and elsewhere, and send the narcotics proceeds back to Coke and his co-conspirators," the DEA said.

"Coke and his co-conspirators also arm their organization with illegally trafficked firearms," the agency said.

Coke is on the Justice Department's list of Consolidated Priority Organization Targets, which the department said "includes the world's most dangerous narcotics kingpins."