Jamaica: State of emergency in Kingston 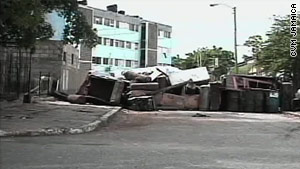 Kingston, Jamaica (CNN) -- Jamaican authorities declared a state of emergency in Kingston after gang members supportive of an alleged drug lord wanted by the United States attacked police stations and blockaded a large swath of the city.

Two police stations were evacuated after being hit with Molotov cocktails, while the status of a third was unclear.

Gang members blocked off a miles-long area of Jamaica's capital city -- mostly in West Kingston -- using vehicles, sandbags, barbed wire and anything else they could find.

Are you there? Send us your stories, images

The standoff revolves around attempts by the United States to extradite suspected drug kingpin Christopher "Dudus" Coke. Last year he was charged with conspiracy to distribute marijuana and cocaine and with conspiracy to illegally traffic in firearms in U.S. federal court.

In a statement issued Sunday afternoon, Golding announced an emergency meeting of his cabinet in response to the violence and blockades, the Jamaica Information Service said.

The state of emergency extended to St. Andrew, an area near Kingston, according to the Jamaica Information Service.

Coke was charged in August by the attorney's office in New York, which accused him of leading an international criminal syndicate known as the "Shower Posse."

"At Coke's direction and under his protection, members of his criminal organization sell marijuana and crack cocaine in the New York area and elsewhere, and send the narcotics proceeds back to Coke and his co-conspirators," the U.S. Drug Enforcement Agency said in a release accompanying the charges.

"Coke and his co-conspirators also arm their organization with illegally trafficked firearms," the DEA said in a statement at the time.

Coke is on the Justice Department's list of Consolidated Priority Organization Targets, which the department says "includes the world's most dangerous narcotics kingpins."

The State Department issued a travel alert for Jamaica on Friday, saying that the "possibility exists for violence and/or civil unrest in the greater Kingston metropolitan area."

"If the situation ignites, there is a possibility of severe disruptions of movement within Kingston, including blocking of access roads to the Norman Manley International Airport," the alert said.