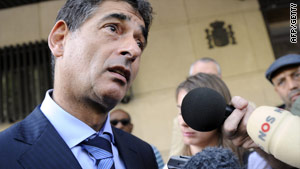 (CNN) -- An Argentine pilot accused of participating in "death flights" during the nation's "dirty war" in the 1970s and '80s has been extradited from Spain and will face charges Friday, the government's Judicial News Service reported.

Former Argentine Navy Lt. Julio Alberto Poch was arrested last year on charges that he was at the helm of aircraft from which 950 drugged and blindfolded prisoners were thrown alive during the 1976-83 right-wing dictatorship. Poch, a commercial pilot for the Dutch airline Transavia.com, was arrested September 23 when his flight made a stopover in Valencia.

He was wanted on an international arrest warrant and was returned to Argentina on Thursday.

As many as 30,000 people disappeared or were held in secret jails and torture centers during the dictatorship.

The prisoners included students, labor leaders, intellectuals and leftists who had run foul of the dictatorship because of their political views. Most were dragged off the street or otherwise summarily arrested and held without trial in secret prisons where many were tortured.

CORRECTION
A photo caption in an earlier version of this story erroneously identified lawyer Gerard Spong as Lt. Julio Alberto Poch. CNN apologizes for the error.

Another pilot, former Navy Capt. Emir Sisul Hess, was also arrested last year on similar charges. Sisul Hess, accused in 56 deaths, was captured in the Argentine town of Bariloche, near the border with Chile.

Sisul Hess must remain in prison pending trial, authorities determined at a hearing in April. No date for the trial has been set.

Both men were arrested after they told colleagues or friends about their alleged involvement, Argentina's government-run Telam news agency said.