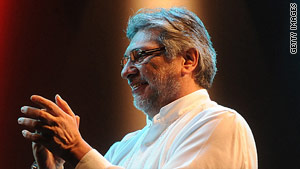 (CNN) -- Paraguay's president is expected to meet with human rights groups Sunday to clarify the effects of a law that temporarily suspends constitutional rights in the north of the country.

President Fernando Lugo said the law, which is in effect for 30 days, will make it easier to crack down on the leftist Paraguayan People's Army.

The law bans public gatherings and gives police the power to make arrests without warrants.

Lugo will seek to reassure rights groups that citizens' rights will be protected during that period.

The emergency measure was enacted in the agricultural provinces of Alto Paraguay, Presidente Hayes, Concepcion, San Pedro and Amambay.

It follows the killing of three civilians and a police officer by the suspected PPA fighters on Wednesday.

"We want to make clear that this measure does not alter the democratic norm in our country," Lugo said after signing the law on Sunday afternoon. "All institutions continue to be in place and will continue to work as normal. We will move forward with the investigative work we've been doing on the criminal activity."

The group has been accused of a series of kidnappings and attacks on police and military posts in recent years.

Paraguay, a country of nearly 7 million people, is nestled between Argentina, Bolivia and Brazil. It is among the poorest countries in South America.