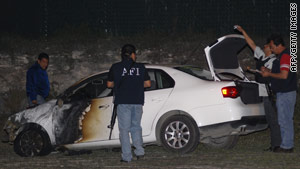 Jorge Antonio Mercado Alonso, 23, and Javier Francisco Arredondo Verdugo, 24, were mechanical engineering graduate students at the Technological Institute of Higher Learning of Monterrey, the Mexican Interior Ministry said Sunday in its apology for the shootings.

Mexican soldiers chasing criminals who had fired on an army patrol shot and killed the students, the Interior Ministry said. Some of the criminals had fled onto the college campus.

The federal government will intensify its investigation to find out what happened, the ministry said.

On Friday, Mexican officials had said the two dead men were part of the criminal gang that shot at the soldiers. University officials also said Friday that all students were safe.

That account changed Saturday, when Mercado's mother tried to call him after finding out about the campus shootout. When she couldn't reach him, she traveled to Monterrey, where she identified her son's body, said the campus rector, Rafael Rangel Sostman.

"I'm certain he is with God," said the mother, Rosa Elvia Mercado Alonso.

Both men were scholarship students, the college said.

Monterrey is in Nuevo Leon, one of two states in northeastern Mexico where drug cartel members blocked roads with hijacked vehicles Thursday and Friday to prevent military reinforcements from arriving. The criminals also set up roadblocks in neighboring Tamaulipas state.

The area, which borders Texas, has seen bloody fighting between the Zetas and Gulf cartels after a recent gangland slaying. Hours-long gun battles are common, and U.S. officials were recently forced to temporarily close the consulate in the city of Reynosa.

There are no official government tallies, but more than 16,000 people are estimated to have died in the drug wars. The vast majority of the deaths are among reputed criminals, with some police and military also being killed. Relatively few of the deaths have been civilians.

Even so, the United States and Canada have issued travel warnings, particularly along the border area. The Texas Department of Public Safety took the unprecedented step this year of recommending that students on spring break not go to border areas inside Mexico.

News of the violence and the travel warnings apparently have had an effect. Mexicans say tourism along the border has declined significantly this year.