Billionaire sworn in as Chilean president 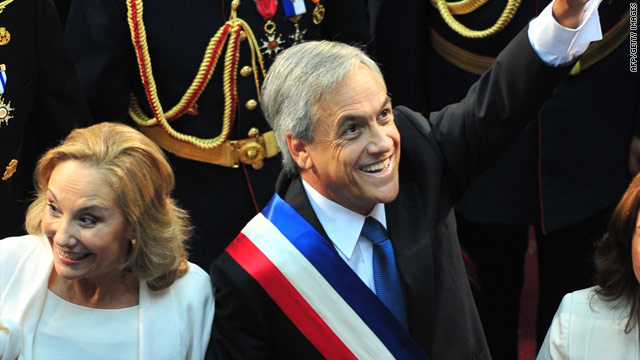 Santiago, Chile (CNN) -- Sebastian Pinera was sworn in Thursday as president of Chile, taking over a country battered by a recent earthquake but with a strong economy and stable social institutions.

Pinera, a billionaire, is the first conservative to lead Chile since the fall of Gen. Augusto Pinochet's military dictatorship in 1990.

Educated in Chile and at Harvard University in the United States, Pinera is an economist, investor, businessman and former senator.

Bachelet, a liberal, defeated Pinera in the presidential elections in 2005. She endorsed Pinera's opponent in a runoff election in January.

But Pinera said recently that responding to the earthquake requires the country to transcend partisan differences.

"These are times when we have to act with a sense of national unity," he said. "It is not the time for conflict between government and opposition."

The 8.8-magnitude earthquake and subsequent tsunami February 27 killed more than 500 people and affected up to 2 million.

A 7.2-magnitude temblor struck Thursday as dignitaries were filing into the congressional hall in Valparaiso for the transfer of presidential power.

Under Chile's constitutional term limits, Bachelet could not run for a second consecutive four-year term.

"I leave sad because of the pain of our people but with my head held high," a teary-eyed Bachelet said in a brief farewell address from the La Moneda presidential palace in Santiago, Chile's capital. "I leave proud of what we have been able to build as a nation, of the role we have played.

"I leave, above everything else, very proud of the country we are."