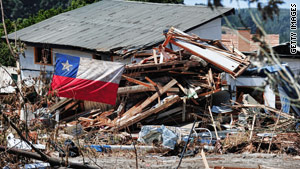 Chile began a three-day period of national mourning Sunday for the victims who died in the February 27 quake.
STORY HIGHLIGHTS

Santiago, Chile (CNN) -- Chile marks three days of mourning starting Sunday, with every house authorized to hang the national flag in memory of those who perished in a massive earthquake a week ago.

Hundreds of people died when the 8.8-magnitude earthquake struck on February 27. It also triggered a tsunami that toppled buildings, particularly in the Maule region along the coast.

The death toll was lowered Thursday as authorities reviewed discrepancies in the reported number of victims in the Maule region.

To limit confusion, Deputy Interior Minister Patricio Rosende read aloud the names of 279 Chileans whose bodies had been identified by Thursday evening.

The new tally does not account for hundreds of unidentified victims.

"It takes months sometimes to compile the information, because one of the biggest problems in the affected areas is the lack of precision and uncertainty at the scene," Rosende said.

Video: Diving for the dead in Chile
RELATED TOPICS

Aid poured in for Chile from home and overseas, with a local television station hoping to raise $27 million by Saturday night and the United Nations pledging money toward recovery efforts.

"Chile Helps Chile," a telethon that started Friday, ran until Saturday night. It was unclear whether it had reached its goal early Sunday.

United Nations chief Ban Ki-moon pledged up to $10 million for relief and recovery efforts during a two-day visit that included a visit with Chilean President Michelle Bachelet.

"I am visiting this city with a deep sadness," Ban said Saturday in Concepcion. "Standing before this destruction, I can feel for your loss, your struggle."

Ban also announced a team effort between U.N. agencies and the Chilean government to determine the priority areas for funds, with emphasis on health, shelters, education and water. The secretary-general plans to bring the matter in front of the United Nations on his return.

The United States has also sent in help, including 71 satellite phones and mobile water treatment units, the State Department said.

Six more water treatment units are to arrive within a week. A field hospital and two C-130 aircraft to assist with moving supplies around the country have also been deployed.