Jailed missionaries could be released 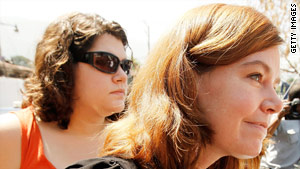 Charisa Coulter, left, and Laura Silsby, who have been detained in Haiti, could be set free this week.
STORY HIGHLIGHTS
RELATED TOPICS

Port-au-Prince, Haiti (CNN) -- A judge in Haiti said he expects to make a decision soon on the possible release of two American missionaries detained on suspicion of kidnapping 33 children after the earthquake in January.

Judge Bernard Saint-Vil said he would make a decision regarding the fate of Laura Silsby and Charisa Coulter to come within days.

Last week, Saint-Vil released eight of the 10 missionaries who had been detained. However, Silsby and Coulter remained in a Haitian jail because the judge said he wanted to learn more about their motives.

Saint-Vil said he traveled to the Dominican Republic to see where Silsby said she intended to open an orphanage. But he said it would be a few days before he could make an official pronouncement on the case.

Avion Fleurant, attorney for the two Americans, said he was confident his clients would be freed as early as Wednesday.

"They will be free," he said. "I thank the world for believing in American innocence."

The 10 Americans, many of whom belong to a Baptist church in Idaho, have said they were trying to help the children get to a safe place after the massive earthquake flattened cities and towns in Haiti.

Silsby originally claimed the children were orphaned or abandoned, but CNN later determined that more than 20 of them had at least one parent living. Some said they placed their children in Silsby's care because that was the only way they knew to ensure a better quality of life.

Silsby said Tuesday that she was thankful for the support of friends and family.

"We are thanking God for the judge's efforts to seek out truth, which will confirm our innocence on all charges," she said.

The eight other missionaries left Haiti a week ago after being granted bail without bond, akin to being released on their own recognizance in the U.S. justice system.

CNN's Lonzo Cook and Gary Tuchman contributed to this story.