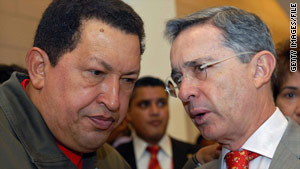 Cancun, Mexico (CNN) -- Latin American and Caribbean leaders meeting in Mexico approved the creation of a regional organization Tuesday that leaves out the United States and Canada.

Approval for the Community of Latin American and Caribbean States came from heads of state attending the final session of a two-day "Unity Summit" near the Mexican beach resort of Cancun. More than 30 heads of state attended the meeting hosted by Mexican President Felipe Calderon.

Creation of the Community of Latin American and Caribbean States, which would bring together the region's 33 countries, was a top item on the agenda. Some leaders see it as an attempt to counterbalance the Organization of American States, in which the United States and Canada are members.

The pledges of unity came one day after Venezuelan leader Hugo Chavez and Colombian President Alvaro Uribe got into a shouting match at a private luncheon for the heads of state.

Tensions cooled Tuesday, with both nations saying they are willing to work within the framework of the new agreement to improve relations.

In an exclusive interview with CNN en Español's Carmen Aristegui, Chavez gave his version of the headline-grabbing incident.

Uribe had accused Chavez of enforcing an economic embargo on many Colombian goods, something that Chavez denied.

"I think that if the table hadn't been there as an obstacle, and our friends weren't sitting right there, that President Uribe physically would've attacked me," Chavez said. "If this unfortunate incident served as catharsis for Uribe, and he can sleep well tonight because he told me what he wanted to tell me, then may he sleep peacefully. I am willing to speak with him, just like we have talked about a million times."

Published reports Tuesday in major newspapers in Colombia, Argentina, Spain and other nations said Uribe told Chavez to "be a man," to which the Venezuelan leader replied "go to hell," something that Chavez confirmed to Aristegui.

In the interview, Chavez also addressed the creation of the new regional community and speculation that its addition may compete with the OAS.

"I think that it will be in addition to the OAS, and that the OAS will disappear in the future," Chavez said.

The importance of the new organization, he said, is that it allows the region to work together without the overbearing influence of the United States.

Referring to the United States, Chavez said, "The 'gringo' empire has always wanted us to be at odds, divided, to impede what has started here, which I think is the most important: true integration from Mexico to Argentina."

The two nations have had poor relations for years, but they worsened last year when Uribe signed an agreement with the United States to allow the U.S. military to use some Colombian bases.

Tensions have escalated as the countries have accused each other of attempts to destabilize the other.

Colombia bombed a FARC stronghold in Ecuador in March 2008, prompting Chavez to take Ecuador's side and move tanks to Venezuela's border with Colombia. Chavez also took economic and trade measures against Colombia that Uribe likened to an embargo at Monday's heated luncheon.

Chavez, in turn, has accused Colombia of sending unmanned planes to spy on Venezuela.

Monday's confrontation was not the first time in recent years that Chavez has had a run-in with a foreign leader.

"Why don't you shut up?" Spanish King Juan Carlos asked Chavez during an Ibero-American summit in Chile in November 2007.

In September 2006, Chavez referred to then-U.S. President George W. Bush as the devil during a speech before the United Nations General Assembly.