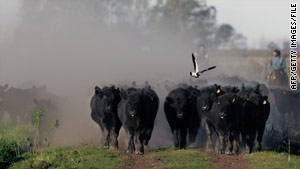 Argentina is the third-largest exporter of beef in the world.
STORY HIGHLIGHTS
RELATED TOPICS

(CNN) -- Three days after a consumers' group called for a meat boycott, the head of Argentina's beef industry said Thursday prices will fall by week's end.

Gustavo Valsangiacomo, president of the Argentina Beef Industry Union, declined to say the boycott was responsible for the price drop. But he acknowledged that demand for beef is falling, the official Telam news agency said.

"There are a sum of factors," Valsangiacomo told Telam. "I don't want to take importance away from the boycott, but it will be analyzed by the end of the week. Nonetheless, we undoubtedly believe that prices reached a point that the public cannot and does not want to accept."

On Monday, an Argentinean consumer group called for a one-week beef boycott in an attempt to lower prices in a nation that eats more beef than anywhere else in the world.

The price of beef has increased 40 percent to 50 percent since December, said the Association of Free Consumers, which called for the boycott.

The group cited success in a similar recent boycott of tomatoes, which also had risen in price. Within a few days of the tomato boycott, prices dropped, the consumer organization said.

Valsangiacomo said the beef industry had reached a particular point in which cattle growers have cheap feed but have tried to maximize their profits.

"There has to be an equilibrium between their costs and what consumers are paying," the industry chief said.

Argentina -- a nation of nearly 41 million residents and 51 million head of cattle in 2007, the latest year comparison figures are available -- has faced a crisis as cattle supplies have dipped to their lowest levels in 45 years, according to the Argentina Farm Federation.

The Association of Free Consumers cites three possible reasons for the decline in cattle stock: a significant increase in the number of slaughtered livestock; an acceleration in the cultivation of soy, with more than 10 million hectares (24.7 million acres) converted from livestock to soy production; and more Argentineans buying beef.

Drought also has decreased the size of available pasture land.

Argentineans eat more beef than any other nation in the world -- 68 kilograms (150 lbs) per person annually, the Farm Federation said. Despite the high consumption, that's a significant decrease from the 80 kilograms (176 lbs) per person per year in the 1970s, the farmers' group said.

Argentinean beef is considered among the best in the world, and the nation is the third-largest exporter in the world, behind Brazil and Australia. But the drastic decline in beef cattle has led some Argentineans to worry the nation eventually could have to import beef to keep up with the high demand.