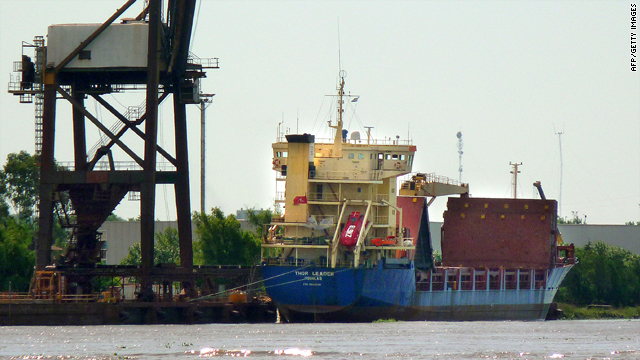 Argentinian authorities have prevented the Thor Leader, seen here at Campana on February 11, from leaving the port.
STORY HIGHLIGHTS

Legislator Ruperto Godoy said lawmakers will try to draft a law codifying Fernandez's decree and will meet Thursday with Foreign Ministry officials to see what steps to take next, the government-run Telam news agency reported.

The moves come amid growing tensions over British oil companies' efforts to drill off the northern coast of the islands.

The Falklands, known as Las Malvinas in Argentina, lie in the South Atlantic Ocean off the Argentinean coast and have been under British rule since 1833. But Argentina has always claimed sovereignty over the territory.

Britain won a brief war the two nations fought over the islands in 1982.

"Argentina and the UK are important partners," the Foreign Office said in a release. "We have a close and productive relationship on a range of bilateral and multilateral issues, including the global economic situation (particularly in the G20), human rights, climate change, sustainable development and counter-proliferation. And we want, and have offered, to co-operate on South Atlantic issues. We will work to develop this relationship further."

Argentina's deputy foreign minister, Victorio Taccetti, said Wednesday the presidential decree will make it "more difficult and more costly" for anyone to explore for oil, natural gas and other energy resources off the islands.

The measure, Taccetti said, "is integrated into an Argentinean strategy in defense of our legitimate rights, which are systematically ignored by the English."

Tuesday's decree followed an accusation by Argentina last week that a ship docked on the mainland was preparing to transport tubes to the Falklands for oil and gas exploration. The decree also creates a special commission to oversee application of the new measure.

"It's public knowledge that the United Kingdom has started the search for hydrocarbon resources in the Falkland Islands area," Argentine Cabinet Chief Anibal Fernandez said at a news conference Tuesday.

"This has to do with the defense of the interests of Argentineans, not just about sovereignty," Anibal Fernandez said, adding that Argentina lays claim not just to the islands, but to any resources that could be found there.

"The companies that are planning to explore and exploit gas and oil are going to be met with legal challenges because they are doing it on a continental shelf that Argentina maintains is our own," congressman Godoy told CNN.

Argentina does not want war, Telam quoted Fernandez as saying.

"I am talking about international rights that have to do with the possibility of a world with rules other than force, war, the imposition by those who are stronger," the Argentine president said.