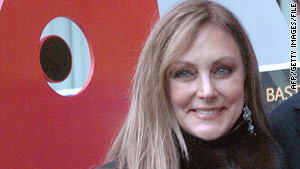 Peggy Fleming, shown here in 2008, was one of two Olympic gold medalists from the U.S. hurt in Sunday's accident.
STORY HIGHLIGHTS
RELATED TOPICS

Peggy Fleming and Vonetta Flowers were taken to a hospital "as a precaution" after a van in the motorcade was involved in a minor accident, according to Biden spokesman Jay Carney. Both were later released from the hospital.

Neither Biden nor anyone else in the motorcade was involved in the incident, Carney said.

The statement did not provide further details about the accident.

Fleming, a champion figure skater, won gold during the 1968 Grenoble, France, games. She was the only American to place first during those games, according to the International Olympic Committee Web site.

Flowers earned gold in the 2002 Salt Lake City, Utah, Olympics in the two-person bobsled competition, according to the IOC.