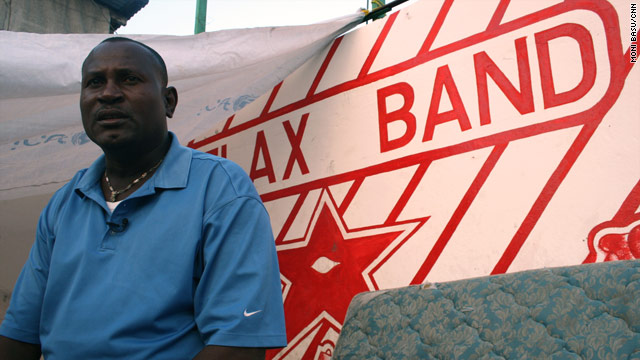 But where there was joy now sits a vast settlement of people left without loved ones, without homes, without life's belongings.

Haitians have celebrated Carnival through dictatorships, military coups and bloodshed. Popular belief was that if a government failed to deliver on Carnival, Haiti's equivalent of Mardi Gras, it was sure to fall, said Marie Laurence Lassegue, Haiti's minister of culture and information.

But this year, the three-day festival has been canceled, another indication of the enormity of the earthquake's devastation.

Musicians fell silent, seamstresses stopped sewing costumes and ghostly skeletons of unfinished floats lay scattered on the outskirts of Port-au-Prince. A month after the devastating January 12 earthquake, the Champs de Mars plaza is home to the capital's displaced, where thousands of people have eked out a tiny space in which to survive.

"This is the first time Carnival is not happening," said Roberto Martino, lead singer of popular Kompa band T-Vice. "I don't even think about music anymore."

Less than a week ahead of Carnival's start on Sunday, revelry is replaced with mourning. The nation's foremost concert producer, Charles Jubert, died. So did members of four bands who were practicing inside a studio that collapsed. Other musicians lost legs, arms and hands. They will not be able to play again.

"I don't think we have time to think of Carnival," Lassegue said. "Maybe when we are finished crying."

Carnival's three days of deliverance and celebration has tremendous importance in the lives of Haitians, Lassegue said. "But this year? I don't even remember when it is."

Instead, the displaced are planning days of prayer.

"We're living in a city that's like a cemetery," said Ronide Baduel, a nurse who lost her home and all her belongings in the quake. Her brother died and suddenly, she found herself far from her middle-class existence, relegated to a makeshift tent and burlap bags she uses for pillows at night.

"I had four good walls around me. Now I have four sheets," she said. She goes to work with a big, black faux-leather purse containing toothpaste, soap and a change of underwear. There, she can bathe properly.

"We don't know how many days, how many months, how long we will be this way," she said. "I am always stressed. It's like living in a jungle. How can I dance at Carnival?"

Baduel and her tent community neighbors said the money that would have been spent on Carnival ought to be used to build housing.

Nearby, the 44 members of Relax Band, who normally would be revving up their street performances in the days before Carnival, worried about their next meal.

They played the Sunday before the earthquake, marching through the streets, getting ready for the big performance. Now, everything was gone,­ including all their instruments that were crushed when band coordinator Ernst Beauvais' house collapsed.

A small stage emblazoned with the red and white logo of Relax Band now harbors a massive water bladder tank dropped off by an aid group and a few mattresses for slumber under the stars.

"It is one of the greatest tragedies to befall our country," Beauvais said, pointing to the rubble of his house. He said it was the street band's 30th anniversary; the musicians were looking forward to showcasing their new song. Almost every band in Haiti debuts new pieces at Carnival.

On the outskirts of town, the skeletons of three floats sit like ghosts, reminders of what might have come next week.

One of the floats belongs to T-Vice.

Brothers Roberto Martino and Eddy Viau would have been practicing with the rest of the band for their Carnival performance ­-- it's an honor to win top prize.

"If you have a good showing at Carnival, you're set for the rest of the year," Martino said. This year, the band had planned a soccer-themed show with a song called "The End of the Match."

Instead it recently released "Nou Pap Lage'' (We Won't Give Up"), dedicated to the victims of the earthquake.

Martino tried to sing a few verses. "There are so many things going through my head," he said. Overcome by emotion, he had to compose himself and start again.

"People are saying Haiti is finished, but no, no, no, we will rise up,'' he sang softly. "We will strive. We will rebuild Haiti. We will stand united."

"Don't be discouraged. There will be light at the end of the tunnel. My Haitian people. I will not let go."

iReport: Discussion of the carnival route

Proceeds from downloads of the song are going to the nonprofit organizations Sow A Seed and MedShare. Music, Martino said, was so essential to Haitian life. But he didn't know when this rare silence would end; when he would be able to write lyrics, put them to melody.

"We're all so traumatized," he said. Carnival, he said, was Haiti's musical showcase. "We've lost our biggest tradition. Carnival was part of us."