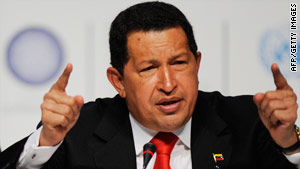 (CNN) -- Venezuelan President Hugo Chavez has declared a state of emergency for the South American nation's electricity supply and announced a series of billing sanctions and rewards based on a customer's energy use.

The state of emergency will exist for 60 days, Chavez said.

Chavez blames a long drought that has reduced energy production at the country's main hydroelectric dam, while others say the real problem is a lack of investment in energy infrastructure.

Regardless of the reason for the electricity shortages, experts warn that Venezuela faces a complete electric collapse if something isn't done soon.