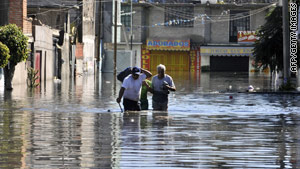 People wade through the flooded Valle de Chalco, on the outskirts of the Mexico City area, on Friday.
STORY HIGHLIGHTS
RELATED TOPICS

Mexico City, Mexico (CNN) -- Heavy flooding in central Mexico in the past week has killed at least 33 people and left thousands homeless, the government said Monday.

Schools remained closed in five cities in Mexico's Michoacan state, where the flooding has killed at least 22 people and left more than 3,500 residents homeless, the state government said on its Web site.

Another 83 people still were missing Monday in Michoacan, a state in western coastal Mexico that has been beset by drug violence in the past few years.

A mudslide Saturday killed at least 11 people near the small town of Temascaltepec, in neighboring Mexico state.

Uncharacteristic heavy rain throughout Mexico also has led to flooding in the nation's capital, Mexico City.

Up to 35,000 people nationwide could have been affected, published reports said.

In Valle de Chalco, on the eastern outskirts of the Mexico City area, officials announced that contaminated water from a sewage network that overflowed Friday will continue to flood the town for at least another 48 hours. The number of affected houses in the city grew from 2,000 on Friday to about 3,000 on Monday, the government said.

Mexico state is bordered on the west by Michoacan and adjoins Mexico City on three sides -- north, east and west.

In Mexico City, officials announced the reopening Monday of 165 of the 174 schools that were closed Friday because of the heavy rain and flooding.

Calderon and other Mexican officials have vowed to help displaced families, including offering them food, medicine, shelter and cash allowances to buy new furniture.