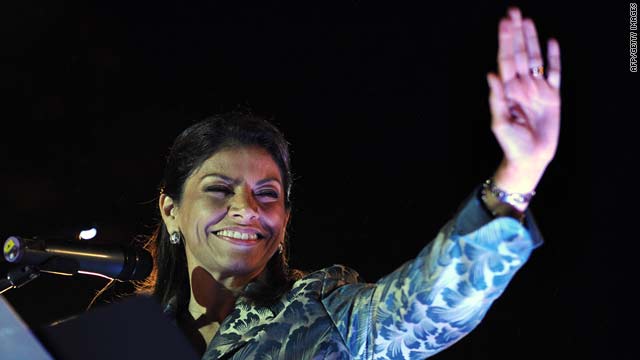 "I want to thank the pioneering women who years ago opened the doors of politics in Costa Rica," Laura Chinchilla said Sunday to flag-waving supporters in the capital, San Jose. "My government will be open to all Costa Ricans of good faith."

Second-place candidate Otton Solis of the Citizen's Action Party had conceded defeat earlier in the evening, as the PLN -- the Spanish acronym for the National Liberation Party party -- forged its way to a nearly 2-to-1 lead.

Polls showed Chinchilla garnering 46.8 percent of the vote, with 84 percent of election sites reporting. Solis had 25.1 percent, while Otto Guevara of the Libertarian Movement had 20.9 percent.

Election day was festive throughout the nation, with video footage showing supporters of the main presidential candidates dressed in their respective campaign colors.

The festivities included election sites where children could vote in a mock presidential vote. The educational outreach let the children pick their candidate on a digital ballot not unlike the ones the rest of the electorate cast their votes with.

Some 2.8 million Costa Ricans are eligible to vote.

The legacy of outgoing President Oscar Arias -- a Nobel laureate who leaves office a popular, if polarizing, leader -- has in many ways shaped the presidential race.

Although he has given Costa Rica a larger role in foreign affairs through his involvement in seeking resolution to the political crisis in Honduras, but his style has rubbed some the wrong way.

After casting his vote Sunday, Arias called the electoral process transparent and trustworthy.

"I would like to thank the Costa Rican people for filling the streets with color," he said.