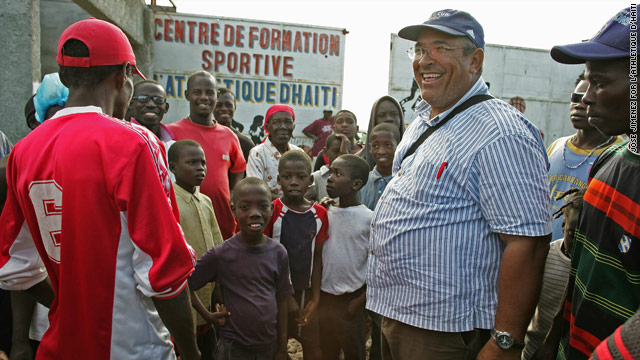 "To have this come to us, it's really beyond imagination. Of all places," Duval said of his homeland.

Duval has been welcoming children from the slums of Haiti to his sports program, L'Athletique d'Haiti (Athletes of Haiti), since 1996. But today, the field where the kids play is serving as a refuge for Haitian families displaced by the devastating earthquake.

Goalposts are being used to build makeshift shelters for some people, while others are sleeping in tents Duval has provided.

"We are saving the concrete blocks. We are trying to keep it secure," Duval said. "What we're trying to do is keep it clean, set up some bathrooms, set up some water and give them care, understanding ... so they are safe here."

Haiti is the poorest country in the Western Hemisphere and has a history of political violence, extreme poverty and natural disasters, a history that Duval has witnessed firsthand.

Duval, a Haitian who was educated in the United States and Canada, was a national soccer champion in college. When he returned to Haiti, however, he was imprisoned, starved and tortured under the rule of President Jean-Claude ("Baby Doc") Duvalier. 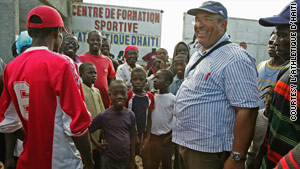 Duval spent 17 months in jail and says he witnessed more than 180 deaths among fellow prisoners. On the brink of death himself and weighing just 90 pounds, Duval's life was saved in 1977, when then-President Carter's administration intervened and demanded the release of all political prisoners in Haiti.

Once released, Duval vowed to help make Haiti a better place. He started a support group for former political prisoners and worked as a human rights advocate. Along the way, he realized he wanted to pass on the values that were important to him to a new generation of Haitians.

"If you're gonna change a society, I think you need to give some good foundations to people who are willing to receive those basic values," he said. "The youth are important, because the youth are the future."

In 1996, Duval started L'Athletique d'Haiti, which gives kids from some of the poorest neighborhoods an opportunity to get off the streets, play a sport and receive a daily meal.

"The objective is for me to make a contribution to the Haitian society in terms of the physical, mental and psychological development of the Haitian kid," he said.

"To me, the day that I can say that every kid in Haiti has the opportunity to come -- and peacefully and in the best conditions -- develop his mental and physical power, I feel that I can die in peace."

Duval's program has grown to serve 1,500 kids ages 6 to 20 in five locations in Haiti. In addition to athletics, they build social skills and participate in educational and tutoring programs.

Now, three weeks after the earthquake shattered Haiti's already fragile infrastructure, the youth of L'Athletique continue to play on the fields of the main Drouillard compound in Port-au-Prince. But now, many live there as well.

Want to get involved? Check out Boby Duval's Web site and see how to help.