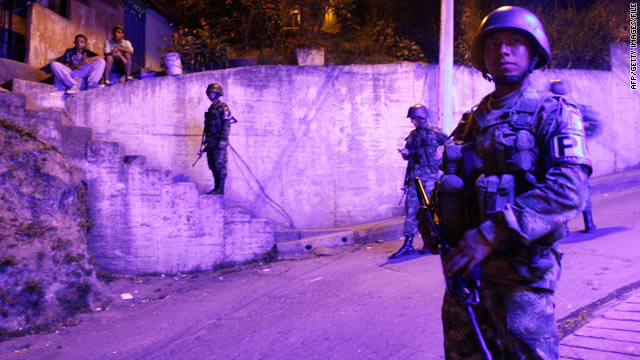 Nowhere is that violence more pronounced than in Medellin, which recorded more than 200 slayings in January alone. The city's homicide rate also more than doubled in 2009 from the previous year.

Bogota, the nation's capital, also is seeing a surge in violence, with more than 100 killings reported last month.

"Whatever you call these groups -- whether paramilitaries, gangs or some other name -- their impact on human rights in Colombia today should not be minimized," said Jose Miguel Vivanco, Americas director at Human Rights Watch.

"Like the paramilitaries, these successor groups are committing horrific atrocities, and they need to be stopped."

The Colombian government has said it decommissioned more than 30,000 AUC members from 2003 to 2006, but Human Rights Watch said many of those demobilizations were fraudulent. Large numbers of heavily armed paramilitaries never left the organizations, or new recruits took the place of those who stepped down, the rights group said.

As a result, Human Rights Watch said, widespread violence has exploded in four regions where the groups have a substantial presence: Medellin, the Uraba region of Chocó state and the states of Meta and Nariño.

The Colombian Center for Human Rights and the Displaced also blames the renewed violence on the resurgence of organizations linked to former paramilitary groups. "Emerging gangs have planted the seed of terror," the group said.

Others offer a more succinct observation.

The Colombian Embassy in Washington declined to comment Tuesday, saying officials there had not seen the report. The embassy's press officer did not immediately return a telephone call Wednesday afternoon after the Human Rights Watch report's release.

The agreement to demobilize by the right-wing paramilitaries was a key political victory for President Alvaro Uribe, and the government maintains that the decommissioning process was a success.

While noting that some ex-paramilitary members might have joined the "emerging criminal bands," the government stresses the current gangs are simply groups of thugs dedicated to narcotrafficking and extortion.

Colombian officials announced last week that more than 2,100 members of "emerging gangs" were arrested in 2009. National Police carried out raids last week in which men suspected of belonging to criminal gangs in 159 municipalities were arrested, news accounts reported.

The National Police also announced a program to combat crime at the neighborhood level.

Observers such as Frechette said the Colombian government should have been doing more all along.

"It's being going on for a long time," Frechette said. "The violence began to grow into what today is called a crisis in Medellin. ... The only people who have been in denial over this is the Colombian government."

And he too lays responsibility on the paramilitary organizations, many of whose members never left.

"They threw away one uniform and climbed into another," he said.

Colombia's National Police said the AUC was responsible for more than 1,000 assassinations and hundreds of kidnappings and incidences of torture. The AUC said most of the victims were guerrillas or their supporters.

The United States classified the paramilitary group as a foreign terrorist organization in 2001.

Colombia started a program to disband the paramilitary groups in 2003, offering legal and financial concessions to members who quit.

Human Rights Watch blames the problems on the government's inability to demobilize the AUC successfully.

"To secure a genuine and lasting paramilitary demobilization, the government should have focused on the sources of their power: their drug trafficking routes and criminal activity, their assets, their financial backers and their support networks in the political system and military," the rights group said.

"The threat posed by the successor groups is both serious and steadily growing," Wednesday's report said. "Colombia's National Police estimates that they have more than 4,000 members. Nongovernmental estimates run as high as 10,200."

The groups are actively recruiting members and moving quickly to replace leaders who have been arrested and are expanding their areas of operation, Human Rights Watch said.

"The successor groups are engaging in widespread and serious abuses against civilians, including massacres, killings, rapes, threats and extortion," the report said. "They have repeatedly targeted human rights defenders, trade unionists, displaced persons including Afro-Colombians who seek to recover their land, victims of the AUC who are seeking justice and community members who do not follow their orders."

The resurgence of paramilitary groups also has led to the aggravation of a serious problem in Colombia -- the internal displacement of up to 4 million of the country's 45 million citizens.

"The rise of the groups has coincided with a significant increase in the rates of internal displacement around the country from 2004 through at least 2007," the report said.

Human Rights Watch said the Colombian government is legally obligated to protect civilians, prevent abuses and ensure accountability when crimes occur. But the government has failed to ensure that police and prosecutors have adequate resources, the group said.

And the supposed dismantling of the paramilitaries has been a failure, Human Watch Rights said.

"To many civilians, the AUC's demobilization has done little to change the conditions of fear and violence in which they live," the report concluded.

"While there are differences between the AUC and its successors, the successor groups are in several respects a continuation of some of the AUC's paramilitary 'blocks' or groups," Human Rights Watch said.

"As reported by the police, a majority of the leaders of the successor groups are midlevel AUC commanders who never demobilized or continued engaging in criminal activity despite ostensibly having demobilized. The groups are active in many of the same regions where the AUC had a presence and operate in similar ways to the AUC: controlling territory through threats and extortion, engaging in drug trafficking and other criminal activity and committing widespread abuses against civilians."