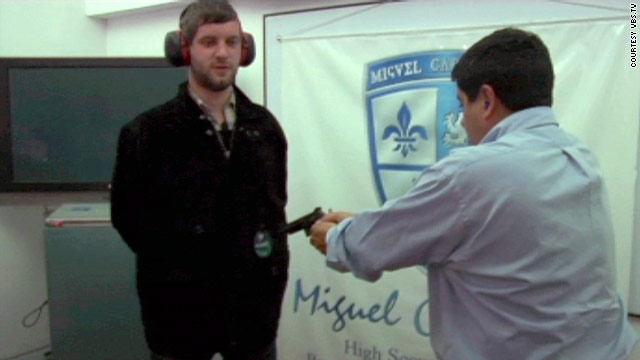 Brooklyn, New York (VBS.TV) -- Colombian tailor Miguel Caballero specializes in making garments that enable the wearer to get shot at point-blank range with nary an injury besides, maybe, a bruised ego. At-high-risk-of-catching-a-bullet demographics, such as rappers and politicians all over the world, rely on Miguel's handiwork. And, lucky me, when I was recently in Bogota for VBS.TV covering a few stories, I had the chance to visit Miguel's shop, learn about his protective clothing, and get shot in the gut by him. Seriously.

Upon arriving at Miguel's warehouse one sunny morning, I received a guided tour from a friendly office assistant. It all seemed totally benign -- sweet middle aged ladies stitching together jackets and blazers, smiling at me as I walked by. I could've been at American Apparel's Southern California warehouse.

But when I sat down with Miguel and he got into the whole spiel about why he made the type of clothing he did, nervousness started to set in. Was this guy seriously going to put a thin jacket on me and then shoot me with a real live handgun? The man is running a multimillion-dollar international business. Is he really so confident in his wares that he's going to risk it all by potentially killing a novice American journalist on camera?

The answer was yes. But first he had to finish telling me about himself.

Miguel explained his business model to me, and it was hard to dispute the logic. The world's an increasingly dangerous place for political leaders and citizens alike. Miguel is simply combining the need for safety with the natural desire to look good.

Watch more videos from around the globe on VBS.TV

And judging by his success, I'm not the only one who gets it. There were rumors that President Obama wore some of Miguel's goods during his inauguration. Plus, look at the automobile industry. Not long ago, Hummers were the province of soldiers in combat. Today, they're a staple of suburban strip malls. How long until Miguel's pieces follow suit?

By this point, Miguel seemed very determined to prove the reliability of his products to me. I figured it would be somewhat staged: I'd sign something, be ushered into a safe room, and he'd fire a couple blanks into some military grade flak jacket. Thanks and good night.

Instead, my new buddy Miguel popped the question mid-interview in his office. And it wasn't really a question. I believe he said, "Now we'll do a demonstration with you." Not exactly a request.

He stood up from his desk, opened a drawer, and casually pulled out a .38. This was happening very fast. He moved me over to the side of the room, outfitted me with some noise-reducing headphones, and offered me a black suede jacket. After instructing me to take a deep breath on "1" and prepare for a gunshot on "3," he shot me in the gut on "2."

Obviously I lived to tell the tale. But -- most importantly -- I like to think that I looked damn good doing it.