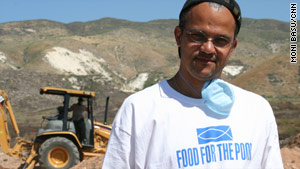 Businessman and charity organizer Daniel Rouzier took it upon himself to bury the estimated 2,500 bodies here.

Titanyan, Haiti (CNN) -- Daniel Rouzier clutched a mahogany rosary and a pair of latex gloves in his left hand, his face covered in a sterile mask.

He watched intently as two front-end loaders clawed into piles of dirt and dumped it into freshly dug trenches. Arms, legs, entire bodies flailed and flew before reaching their final resting place.

The stench of human flesh, decomposing for 17 days, carried with the wind.

Rouzier took it upon himself to bury the estimated 2,500 bodies here. They were mothers, fathers, sons and daughters who were never given a proper burial after they perished in the earthquake that leveled the Haitian capital of Port-au-Prince on January 12.

At least 150,000 people died that day, the Haitian government estimates. Many of their bodies were dumped here, near the village of Titanyan, about 45 minutes northeast of the capital.

Rouzier, who owns a car dealership and helps run the Haitian charity, Food for the Poor, said he was watching a CNN report Friday about how many bodies were just left to rot, without proper interment.

"I was just appalled. This is a sacrilege," he said Saturday.

Haiti, he said, is a deeply spiritual country with great respect for the dead.

"This," he said pointing to the mounds of death, "is countercultural to Haiti -- the total lack of respect for the dead."

Marie Laurence Lasseque, Haiti's minister of information, denied to CNN's Anderson Cooper that the dead had been transported out of the city by truck and dumped out of view without burial.

But after seeing footage of the bodies on CNN, Rouzier had to do something.

By 8 a.m. Friday, he was on the phone, ordering front-end loaders. He asked his welding shop to shape five metal crosses and called Bishop Pierre Andre Dumas to come perform last rites.

Dumas arrived Friday with American priest Richard Frechette, a doctor who cares for the poor in Haiti. The two sprinkled holy water and said prayers over the freshly dug graves and remaining piles of bodies.

Rouzier's crew buried about 1,500 people Friday. The next day, they returned for the remaining 1,000.

No one knows how many such mounds of bodies exist still in these valleys.

Some are near Titanyan, its grim past now linked with this macabre task. This is where the dirty work of politics stooped to its lowest as the bodies of thousands who died under the brutal Duvalier dictatorships were said to have been tossed.

Rouzier surveyed the land -- rocky dirt and gentle rolling hills that will forever be haunted by restless souls. At least, he was able to restore dignity to some of them, though no one will know who is buried here, under the five metal crosses.

"Maybe they are doing them better elsewhere. I don't know," Rouzier said.

He didn't want to blame anyone for what happened. It's easy to point fingers at a time of epic tragedy. He simply found relief Saturday in finding some sense of closure more than two weeks after the devastating earthquake.

"I'm very grateful to be able to do this," he said.

He asked visiting journalists to refrain from walking the mounds of dirt. To not step over the dead.

It was a tough two days for Rouzier.