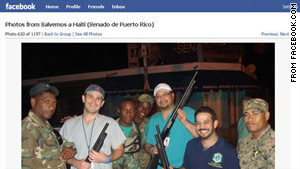 One of the photos posted on Facebook shows smiling doctors holding soldiers' guns.

San Juan, Puerto Rico (CNN) -- A humanitarian mission to aid Haitian earthquake victims turned into a major embarrassment in Puerto Rico on Friday as pictures emerged of doctors drinking, mugging for cameras and brandishing firearms amid the victims' suffering.

The ethics committee of the commonwealth's medical board said it was launching an investigation into whether those involved should be disciplined.

"The poor judgment of a few basically damages the beautiful effort that many others have put in place in terms of providing good medical care," Gonzalez said. "When I saw the pictures, I was very concerned that they have taken pictures of people without any consent."

Some of the photos, which were posted on the social networking site Facebook, show smiling doctors holding guns or toasting each other, bottles of scotch or other alcohol in their hands. Others show medical personnel in what appears to be a clinic, grinning as they attend to patients. Another shows a quake victim on a hospital bed, naked from the waist down except for a thin strip of cloth covering the genitals.

"You can't ever take pictures of patients if you don't have a written agreement and much less publish photos of patients half-nude," the president of the College of Physicians and Surgeons told CNN. Dr. Eduardo Ibarra added, "This is a clear violation of the Hippocratic Oath ... We're going to take all the measures possible to correct this."

Ibarra said some of the photographs were taken in Santo Domingo in the Dominican Republic after the group had operated on 70 patients who were in critical condition.

He said the ethics committee members would identify the doctors and evaluate their acts, "always with the presumption of innocence."

Though the committee has yet to decide on a course of action, some doctors have already suffered consequences, he said.

"Some of them already lost their jobs," he said. "They're going to lose probably their careers. It's a mess. Only because of some stupidity."

Video: Can we trust the Red Cross?

An anesthesiologist who traveled with the group said she was saddened by the photographs, but said her colleagues "gave 200 percent" with limited resources. "Their work was excellent," Dr. Enid Garcia told Puerto Rico's Primera Hora newspaper.

The story led the Friday evening news broadcast of CNN affiliate WAPA, in San Juan, which devoted 12 minutes to the subject, including an interview with one of the doctors who appeared in a photograph carrying a rifle. "I regret it," said Dr. Carlos Ortiz.

He said the pictures were intended as nothing more than a reminder of their work, and that soldiers had handed them their weapons to hold while posing.

The embarrassment was heightened by the fact that the mission was coordinated by Puerto Rico's Senate. Days after the January 12 quake in Haiti, the Senate announced it would oversee sending more than 100 doctors to set up a field hospital near the town of Jimani, across the border in the Dominican Republic. The town has been flooded with Haitians injured in the quake, seeking medical help unavailable at home.

Prior to sending the medical professionals on January 15, Senate President Thomas Rivera Schatz told them, "With you goes the heart of all the people of Puerto Rico."

On Friday, in a news release, he called the conduct of some of them "imprudent" and "indiscreet."

The soldiers should be investigated, he said, for having allowed the health professionals to pose with their weapons.